Assault on the Aerie of the Slave Lords: 5 of 9 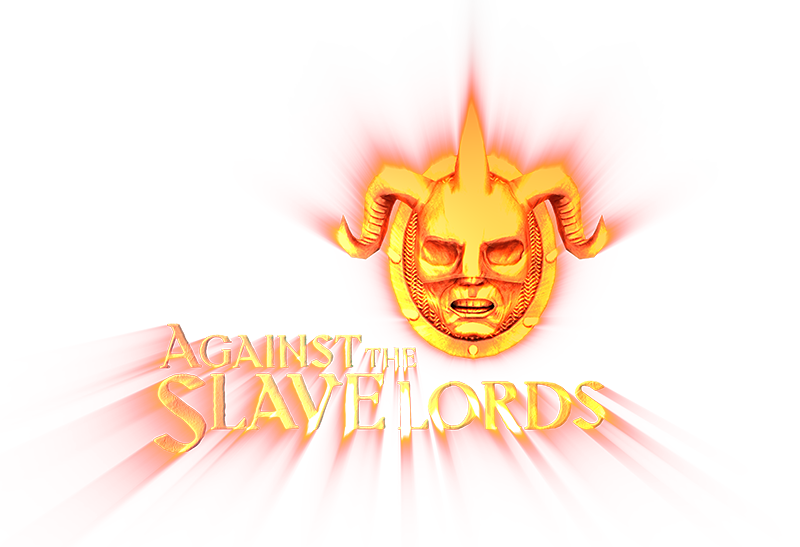 The Heroes 4 Hire awoke in the Sign of the White Knight Inn, and spent the day inconspicuously running a few errands around the City of the Nine, Suderham. Shortly after sunset, they suited up and went next door to the brothel, the Sign of the Rose, paid a small amount of hush money to the madame, and proceeded to the last room on the right to enter the abandoned sewers through the trap door under the bed. There, they traversed northward along a long passageway to the weirdly octagonal room with the statue reconnoitered by Nightshade the day prior. 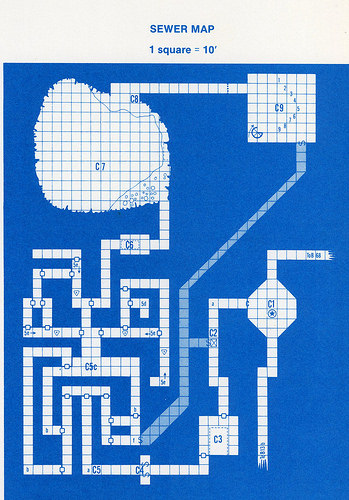 The team stacked up at the southern entrance to the room, observing the motionless statue. Illyia Baham entered the room, but as he did the statue turned around to face them, held up its hand in a “halt” fashion, and in a garbled voice said, “Flee now, or I shall breathe poison death upon you all!” The team held for a moment, with Illyia still in the room, but the statue did nothing further, so Lt. Diplo Norixius also entered the room to assist Illyia in searching for hidden portals. The two found a doorway concealed under a thin layer of limestone in the west wall, but as they did the ‘statue’ attacked. The party rushed the room to engage the ‘statue’, and as they closed the distance they could see that the ‘statue’ was in fact a Flesh Golem that had steel plates bolted through its skin, giving it a kind of makeshift plate armor. The Golem managed to land a slamming fist on Alton Beeblebrox, but otherwise the Heroes 4 Hire dispatched the creature with haste and ease.

The group opened the concealed door and proceeded down the corridor beyond as it turned a corner to the south. Halfway down the following 100’ hall, a shallow pit trap opened under Illyia and Diplo, dropping them 7 feet onto a soft pile of sand. All the way at the north end of the hallway, a stone panel slid down and a 1-foot brass nozzle extended pointing at the party, and they began to hear a familiar whooshing sound, reminiscent of the Orcish Flame Cart they had acquired from the Slave Pits of the Undercity mission. Naïlo Thia, Beeblebrox and Ryoun Rodri leaped over the pit and sprinted down the hallway to the corner at the southern end, while Smedley Hampton, Dajjal and Karraway jumped down into the pit with Diplo and Illyia. A second later, a long spurt of flame shot from the nozzle down the hallway, reaching just beyond the pit and over the heads of the pit’s occupants, but also came up well short of the three at the hallway’s southern corner. The flame spurt eventually extinguished, and no more whooshing sounds were heard, so the team decided all was safe and extracted themselves out of the pit to continue on.

The passageway led to a door, beyond which led to a 40′×40′ room with two doors in the corners, flanking a bulging chest along the southern wall. Diplo locked the 10’ Immovable Pole across the eastern door and stationed himself at the western door while Illyia checked the chest for traps. The rest of the party spread out around the room in preparation for ‘anything’. As Illyia searched, his hand became stuck to the chest, which then transformed into a killer Mimic and took a bite at him. The team piled onto the mimic, taking a few blows from its pseudopods before dispatching it in short order. They looted the body and then checked the door, discovering the east door was false.

Proceeding out the western door, the party entered a long corridor that began to heat up the farther they continued. The temperature reached a point where it caused a measure of exhaustion as they were midspan of the hallway, when two secret doors, left and right of the passage, opened up and a pair of Hellhounds sprang to attack. In concert they exhaled a gout of fire into the party and then charged the front rank (Diplo and Illyia). The party swarmed them, and the hellhounds were destroyed, disappearing in a flash of smoke, flame and leaving only a pile of ash. They took the two spike-and-jewel encrusted collars, the only remains of any value, and turned the next corner back to the north when a giant crossbow bolts sailed at them from out of the darkness. They heard the sounds of heavy footfalls receding and then the slamming of a door.

The team continued north, away from the heat, and came upon a closed door, beyond which led to a series of hallways and doors making a sort of labyrinth. Through passages and doors they searched, finding a metal one-way (from the other side) door with a strange inscription at one point, before coming across a large chamber complete with its own Minotaur. The minotaur fired another massive crossbow bolt at the party before engaging with its greataxe. A short melee ensued, before the Heroes ended the minotaur for good. After a quick looting of the body, they returned to the strange metal door and inscription.

Illyia and Smedley recognized the script on the door as Thieves’ Cant, which read, “DANGER. NO ENTRY.” The party also noted that the floor, walls and ceiling in the 10’ square area immediately in front of the door was also made out of the same dull, tarnished metal. Smedley, Beeblebrox and Dajjal decided to attempt to find how to open the door, but the rest of the team backed well away from the metal area to watch what happened next. Beeblebrox gave the door a hard rap; the door and the rest of the metal area responded with a short, intense burst of electrical energy, shocking the three intrepid trap-testers. The other Heroes laughed at their slightly-smoking friends, and then approached to aid in the effort. Illyia stepped forward, pulled the Wand of Opening from his bag and tapped it lightly on the door. The door gently popped open from the other side, and Illyia spotted the thin, braided copper wire hidden behind a thin foil cover, running from the door and plates toward a small niche in the wall on the other side.

Deciding they would come back to investigate that detail later, the party proceeded into a secret corridor that ran from the labyrinth north for several hundred feet, except for a short side passage that connected to the pit trap in the first hallway via a secret door in the pit they had missed altogether. The long secret passageway ended in what was obviously the back of another secret door, where the team chose to quietly take a short rest to prep for the next battle, whatever it may be. 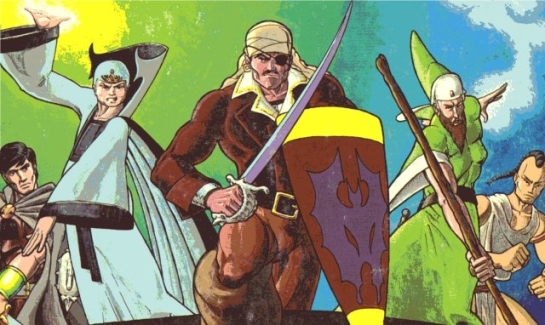 Once ready, the Heroes 4 Hire snapped the secret door open quickly in an attempt to catch whatever was on the other side by surprise. The ploy worked, as they stormed into a huge audience chamber with nine grand thrones arranged in a semi-circle facing away from them, catching five of the Slave Lords in the middle of some humorous conversation. Illyia, invisible by the Sword of Lyons equipped on his hip, dashed into the room and found an open angle at the Slave Lord seated all the way at the opposite end of the thrones. He fired a cross-court shot, striking the target critically in the head and killing him instantly, and that was the immediate end of Ajakstu the Wizard. The rest of the Heroes flooded into the chamber, picking their personal favorite Slave Lord and engaging.

After several hits from archery and spells followed by a gap-closing charge, the surprised Slave Lords finally got their feet under them and reacted. Nerelas the Assassin gulped a Potion of Invisibility and disappeared. Thia sprinted to the foot of the iron staircase spiraling up through the ceiling to prevent that avenue of retreat. The remaining Heroes paired off with Slave lords one by one, with the majority ganging up on Mordrammo the High Priest of the Earth Dragon Temple. Brother Milerjoi came to his aid, knocking Beeblebrox prone and stunning him for several rounds. Feetla the Buccaneer also rushed to Mordrammo’s aid, knocking Ryoun unconscious and bleeding out. Mordrammo cast Mass Healing Word on his comrades, healing their wounds and keeping them fighting against the 2-to-1 odds.

Illyia, still invisible himself, kept circling the room hugging the walls, pulled out the Gem of Seeing recovered earlier in the catacombs, and spotted the invisible Nerelas moving in behind Thia for a backstabbing assassination. Having one hand tied up with using the Gem of Seeing, he targeted the critically wounded Nerelas with a Magic Missile spell, killing him instantly. Thia was startled at seeing the three magical darts sail out of nowhere right at her and then a dead assassin drop out of the ether at her feet. Karraway cast Spirit Guardians and moved into the fray surrounding Mordrammo, Brother Milerjoi, Feetla, Ryoun, Beeblebrox, Smedley, Diplo and Dajjal, circling to get to the dying Ryoun. While the spell piled up the hurt on the three remaining Slave Lords, he managed to reach Ryoun and cast Cure Wounds on him, getting him back to his feet.

The three remaining Slave Lords fought valiantly, but the overwhelming numbers first claimed Mordrammo, then Brother Milerjoi and finally, Feetla. The tough battle completed, the Heroes 4 Hire looted the bodies, searched the room and then hunkered down to take a short rest and recover.

Where are the other four Slave Lords? And how will the Heroes 4 Hire find them to finish the job? What dangers lie in store for the party?