Battle in Breland: A Fine Line Between...

"I won't metagame! I promise!!" {flipping frantically through the PHB} 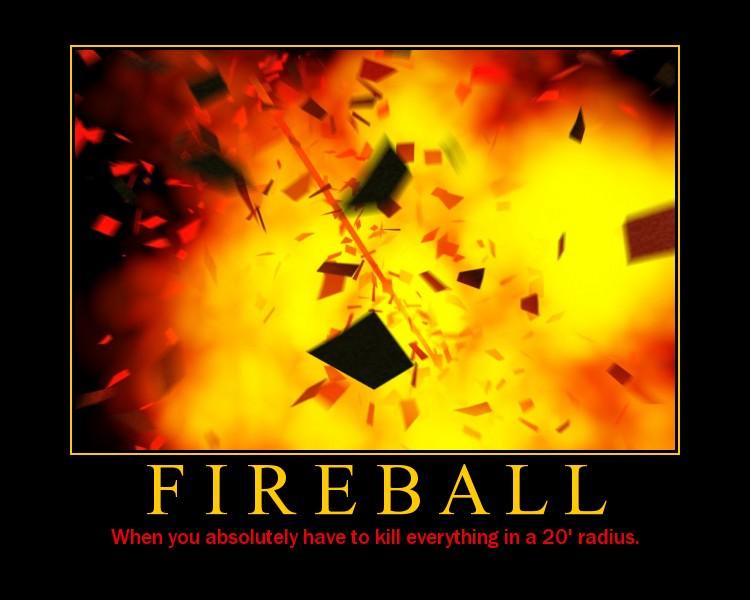 With the ambush set and their quarry squarely in place, the first Fireball loosed from the Heroes 4 Hire’s hide and detonated on the lead wagon in the line, just short of reach of the nefarious Dark Priest. The wagon erupted into a ball of fiery destruction, incinerating the two drivers and horses instantly and throwing bits of debris and ejecta about widely. Smedley “Deadly” Hampton cast Silence upon the first cluster of cultists, which included the Dark Priest, in order to prevent him from casting spells once the cult recovered from the surprise of the ambush. Dajjal immediately brought his horse to a full gallop to close the distance from where he was safely shadowing the caravan.

Rumblebelly charged forward to the edge of the treeline and roared, striking fear into the hearts of man and beast alike. Most of the mounted cultist lost control of their mounts, and Pandemonium ensued. Horses fled left and right, away from the grizzly’s challenge, with their riders hostage in the saddle and frantically trying to regain control. The horses of the third wagon in the line also succumbed to fear, and the wagon moved southwest across the grassy fields and away from the trail as Fireballs detonated the second and fourth wagons into flaming wreckage.

Illyia Baham fired arrows at the Dark Priest from behind the invisibility provided by the Sword of Lyons, and Erendriel Thalolan cast Moonbeam and dropped it squarely on the cluster around the Dark Priest as well. Potema, with Naïlo Thia mounted upon her back, charged forward across the fields and ran down the fleeing (and last remaining) wagon, allowing Thia to gymnastically leap to the wagon and attack the drivers. Potema then killed the nearest horse pulling the wagon, and the collapsing beast immediately caused what could only be termed as a ‘high-speed wagon crash’. Thia again displayed her amazing forest-borne dexterity, leaping from the wrecking crash back to Potema, and once the wrecked wagon came to a stop, Potema killed the second horse as well. The crash killed one of the two drivers, but the other managed to tuck-and-roll his way in the grass to relative safety. One of the mounted cultists regained control of his horse, and came riding in to rescue his comrade from the wagon wreck, but Thalolan moved the Moonbeam upon them, killing both the wounded driver and the horse the other rode in on.

As Dajjal continued to close on the routed caravan, one of the cultists on an out-of-control horse met him in the opposite direction, and Dajjal dispatched him with a few well-placed crossbow bolts. He let the horse continue with its dead rider flopping from the saddle, apparently entangled in the stirrups. He noted he saw another low-level underling, also without control of his mount, fleeing southeast across the plains, and out of range for Dajjal at the moment. He continued toward the main battle area.

The Dark Priest finally regathered his wits after the surprise of the ambush, and rode his steed forward nearly 20 yards northwest to get out of the Silence effects, calling his men to follow suit as soon as he reached the edge of the spell. Four of his men followed suit, gathering around him in a tight cluster of men and horses. The Dark Priest the released the spellcasting he had held, and through a twisting swirl that seemed to compress the group through a singular hole in space and time itself, the group disappeared in an instant, horses and all.

Potema attacked the surviving driver from the wrecked, third wagon, rag-dolling him to death like a chew toy. The last of the cult officers, the only one who did not teleport away with the Dark Priest due to his fleeing and out-of-control mount, wildly tried to regain control of his horse as it took him south from the battlefield at full speed. Nightshade followed on the wing, keeping Illyia informed as she flew. Illyia shot two full salvos of Magic Missile through Nightshade at the fleeing criminal, wounding him considerably before he figured out where the rounds were coming from and dispatching the raven with a well placed Guiding Bolt.

Potema pounced on the last cultist, who lay pinned by his horse that was just killed by Thalolan’s Moonbeam. And just as quickly as it had started, the attack was over, and 34 cultists and 12 horses lie dead, scattered around the burning and wrecked husks of four wagons. The Dark Priest and five of the cult officers had escaped, as had a lone cultist atop an out-of-control horse. As the rage of battle quieted to the simple chirps of birds and slight rustling of wind, the Heroes chose a corpse that was less destroyed than the others, and had Karraway cast Speak with Dead upon it. They asked the animated corpse their five questions, but got little for it.

The Heroes conferred and formulated a plan, deciding to go search the ruins the cult had just vacated in an attempt to reacquire the Dark Priest’s trail. They traveled the two day journey back to the ruins, spreading rumors of an attack on a caravan on the wagon trail as they passed through the village at the top of the main road. They parked their wagons and pack animals where Dajjal showed them the cult did, and then proceeded to the outskirts of the ruins proper.

To where did the Dark Priest teleport? Will they be able to regain his trail now that he knows they are after him? Can his mysterious plan be thwarted in time?

Pursuit of a Madman: The Ruins of Sorrow The Breland King