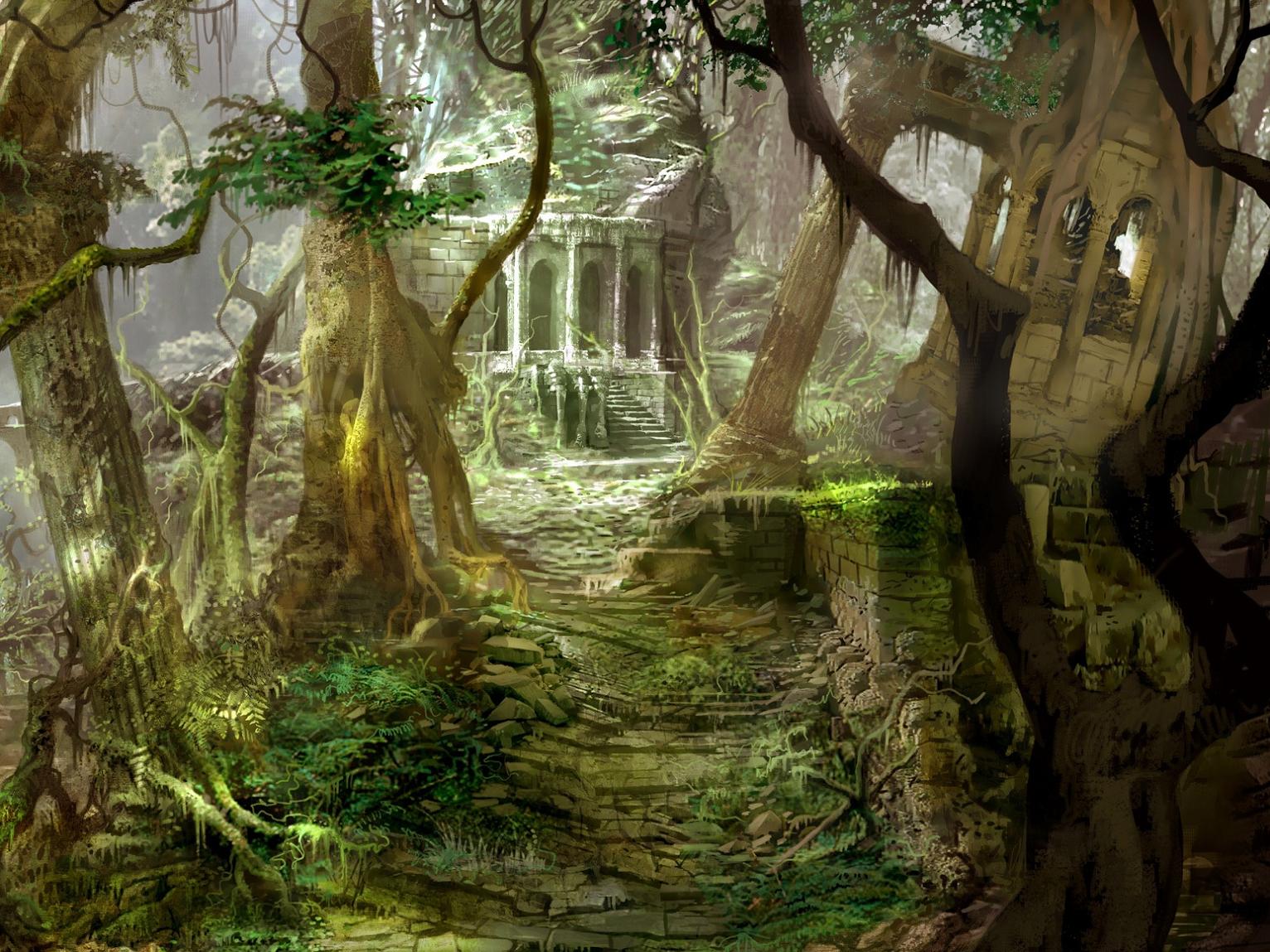 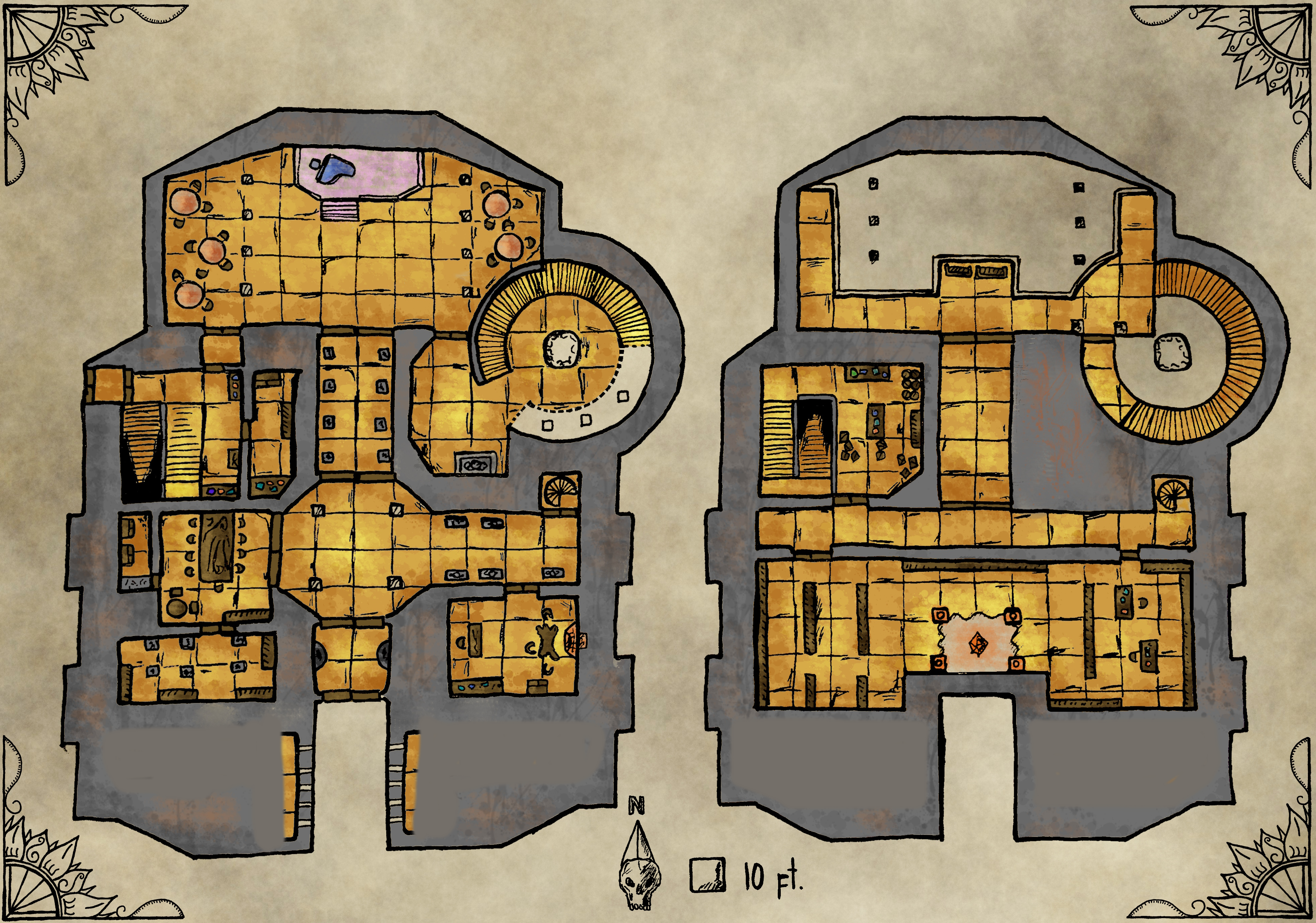 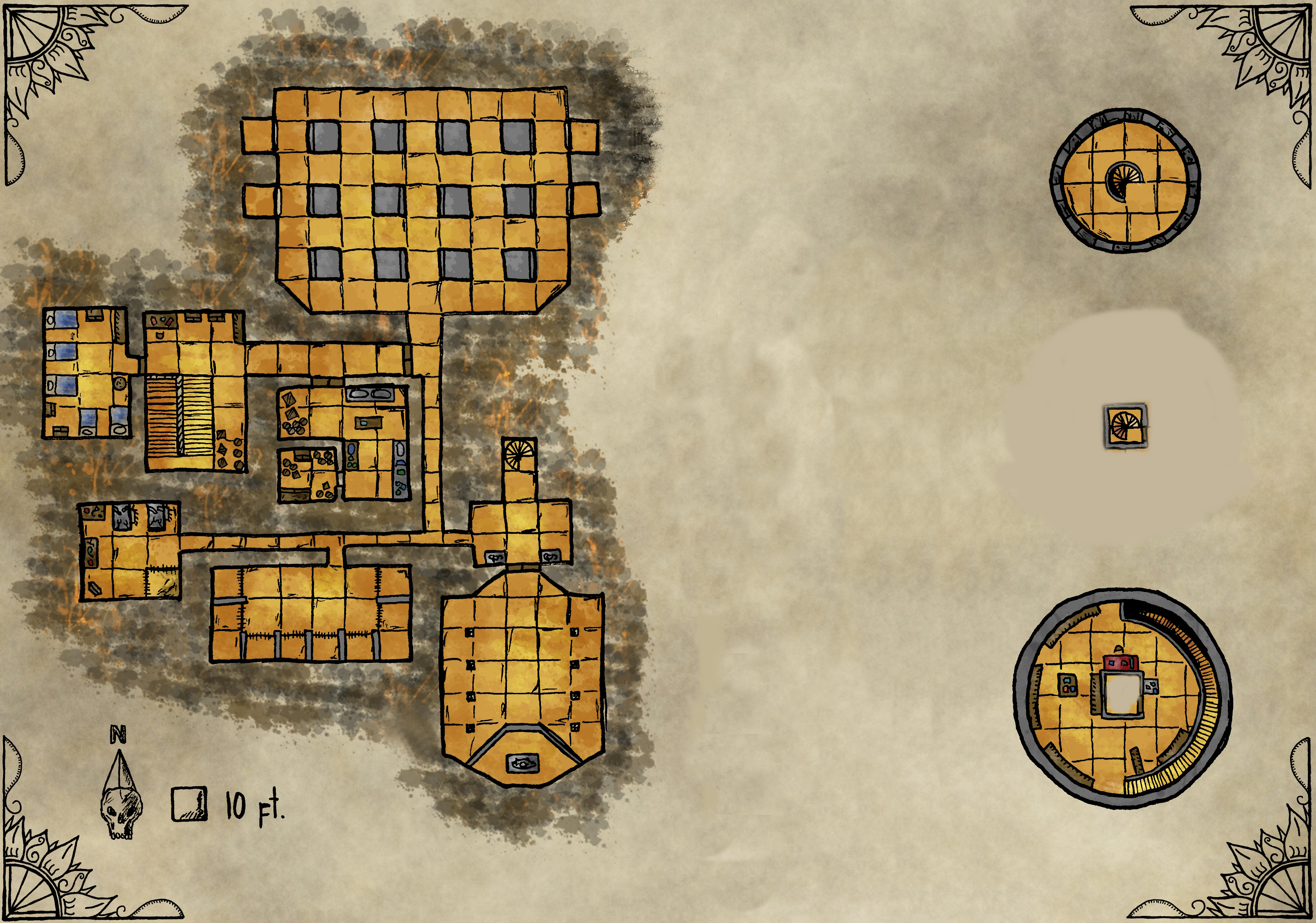 Dajjal maintained a vigil from his concealed observation position until well after midnight, before he began a sweep to reconnoiter the area around the ruins. Finding nothing out of the ordinary, he used Fly to alight atop the less-crumbled of the two watchtowers, listened for a few moments before sticking his head down the spiral stair accessing the tower top. There he saw a landing one floor down and a closed door, before the stair continued to spiral to the floors below. He snuck down to the landing, placed one of his Arcane Eye tokens associated with the Peering Mirror above the door, listened a moment to the sounds of sleeping people from the floors below, then stealthily ascended and returned to his observation blind.

Meanwhile, Luna invisibly shadowed the Dark Priest as he organized activity amongst the Cult, until he retired for the evening. Then she explored the interior of the ruins, which remained mostly intact, and successfully mapped out the majority of it mentally. The next morning the Cult was extremely active with their lord the Dark Priest in charge, which looked to Luna and Dajjal like some sort of preparation activity.

Several cultists were dispatched southward on horseback, and Dajjal left Luna to keep tabs on the Dark Priest while he followed the detachment from a stealthy distance. They rode south a day to the nearest village, where they split and half the contingent continued south. Dajjal stayed with the group in the first ville, where they purchased every available horse in the stables and two wagons. They then immediately gathered their purchases and returned north to the ruins, with Dajjal surreptitiously in tow. They stashed the wagons approximately half a mile short of the ruins, off the beaten path and expediently camouflaged, before bringing the gaggle of horses the rest of the way and corralling them in a paddock lashed together by their cult-mates in the meantime. A few days later, the other half of the group also returned with a small herd of horses bringing the count to 20 in the paddock, and Dajjal snuck back to where the wagons were hidden to find two more had been stashed there as well, bringing the total to four.

The Cult was preparing to move a large force somewhere for something, that much was obvious. Heated discussions flew back and forth across the Earrings of Communication as the team continued it’s approach, still several days of travel away. Dajjal began working on producing several spell scrolls, as he clandestinely observed several days of preparations and loading of supplies and goods for a long travel by the Cult. To him, it appeared they were moving the whole operation out of the ruins to somewhere else.

The Heroes 4 Hire had pulled within two days travel of the ruins, when the Cult completed it’s preparations and set out for parts unknown… 40 men now dressed in plain traveling leathers, the vestments of the Cult now well hidden… 20 horses either pulling wagons or bearing riders… four wagons brimming with supplies, furniture and materials. The gaggle pulled out of the ruins foregrounds slowly, plodded their way down the hidden path off the hill and out of the forest, a full day’s travel before coming to the nearest village and the main thoroughfare that followed the river south. Dajjal and Luna followed from concealment, and watch closely as the Dark Priest led his cult through the hamlet. At the south end of the ville, he guided the group off the main road and started down the wagon trail the forked off and curved to the west, out across the grassy plains along the south side of the forest, and toward the approaching Heroes.

Once the direction of travel the cult was taking became clear, another heated discussion occurred across the Earrings, with the Team less than a day’s travel away from the approaching gaggle of cultists. An ambush tactic and location was hastily decided upon, and the Heroes quickly double timed their mounts and draft animals to get there, stash the wagons and animals a healthy distance away from the potential battle, and then arrange themselves in the tree line along the north side of the trail well before the arrival of the cult’s column of travelers. Dajjal sent Luna ahead, carrying several spell scroll containing Fireball, to fly at top speed past the column and deliver the scrolls to his compatriots at their hiding spot. Dajjal stayed in the treeline, following well behind the gaggle as not to be discovered, but close enough to be able to quickly attack when the time came.

And so, the Heroes 4 Hire hid and Dajjal shadowed, until the group of cultists walked, rode and drove wagons up to the designated spot… the very spot the Heroes had designated for their ultimate doom.

What dangers await the Heroes 4 Hire on this long plunge into battle with the Dark Priest and his Cult? Will they be able to defeat him and thwart his grand scheme? Will they ever find out what it is?

Pursuit of a Madman: The Ruins of Sorrow The Breland King