The Heroes 4 Hire disassembled their base camp and moved their animals and wagons, supplies and equipment up the six-day trek along the perilous mountain trails crossing the Three Sisters to the Forgotten Temple of Tharizdun. Once there, they set up camp inside the upper level of the ziggurat, well out of sight from any avenue of approach. They laid traps and alarms along the main trail, the bridge and the ramp to the Temple, as well as the secret back entrance from the ashen glade that had facilitated the escape of Groorg The Cunning. They also set up a daily Scry to keep tabs on the “Dark Priest” and his approach.

While waiting, the team began to search for the hidden closet mentioned in Slaggoth’s journal in earnest, which did not take them long. Dividing up and searching different rooms simultaneously, Erendriel Thalolan and Naïlo Thia quickly discovered that the two large rooms immediately north of the main staircases were a little off, dimensionally. In short, one of the two “identical” rooms was… short… by 5 feet of ‘missing space’. Searching both suspicious walls, they discovered a 2-1/2 foot section near the southern corner of the west wall in the eastern room that made a slightly different sound than the rest when the stone was rapped upon. A few moments’ examination and Illyia Baham surmised that two hands pushing in and down at shoulder height activated the trigger mechanism.

The section of west wall, along with a corroborating section of floor, ceiling and conjoining south wall, rotated 90 o, Lazy Susan-style, carrying Illyia with the revolving door into the space beyond. He found himself in a 5′×20′ storage space filled with artworks and ornate furniture, all rotted away from the millennia in the dank and dark. Outside, the rest of the party watched as identical surfaces rotated back into position on their side of the revolving door, returning the section of walls, floor and ceiling to concealment. Smedley “Deadly” Hampton followed him in the same way he had observed, and Illyia observed the other side of the mechanism during its action and realized that there was yet another chamber beyond the wall to the south.

The team cycled their way through the revolving secret door until they had gathered in the southern secret chamber, a 20’ square with doors on the left and right and a brass-rung ladder descending into a darkened shaft out of sight. Beyond the side doors, they found closets housing long robes of purple, made of a strange material, with the inverted double ziggurat embroidered into the chest. The robes were long enough to hang beyond the the length of the longest arm, and were affixed with a large pointed hood with eye slits that fully covered the head. Along with the robes, two iron thurbiles and four iron torches were accompanied by two iron containers, one filled with 18 black spheres of an unknown incense and the other with 24 black cones shaped to match a recess in the torches. They also found peepholes looking out into the main hallways as well as secret doors leading out into the rectory. 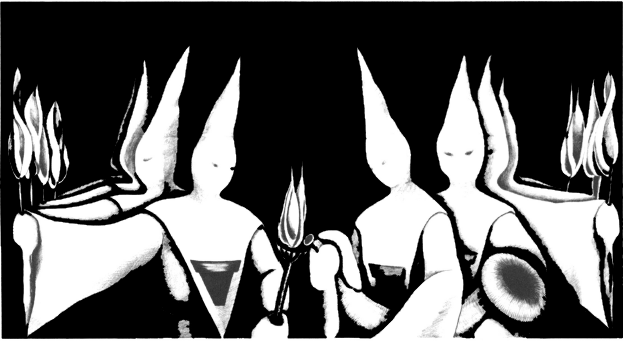 They conferred with Slaggoth’s journal, which was notably problematic. Slaggoth, being a consummate researcher, wrote her journal in notations and bullet-reminders, not in an overly explanatory narrative format that would have been much more helpful. What they were able to glean were a few hints and notations: the chosen go south; oh, its a button; wail, time is imperative, 3h; gray mist needs incense; unbelievably cold; needle-rock everywhere; DO NOT TEAR THE ROBES! The party each donned a robe, loaded cones in the torches and spheres in the thurbiles, and descended 333 rungs down the 333’ to the Undertemple. The temperature in the Undertemple was significantly below freezing, however, the robes seemed to make the conditions bearable. The rung-ladder deposited them into a southerly corridor smoothly hewn out of the black stone, and they walked a short distance into a small, octagonal, four-way intersection of hallways.

The Heroes compulsively looked up at the ceiling as it disappeared into a swirling purple vapor. Floating in the mist three sets of unfamiliar, black runes sequentially came into focus, but strangely they instantly understood them. “Those I find unfit I place on my Left,” read the first. “Those that succeed I place on my right,” said the second. “The Chosen may come before me,” scripted the last. Recognizing a reference from Slaggoth’s journal, namely that ‘the chosen go south’, the team proceeded down the southern corridor a short distance and into a large octagonal room, 40’ across and domed just as high. Carved in the center of each wall, except the north wall where the corridor entered, there was the same characteristic inverted double ziggurat. This time, though, there was a slight variation in it’s design, and the Heroes recognized that they had seen this symbol before. Deep in the mines of [[Danger at Darkshelf Quarry: Shock and Awe | Darkshelf Quarry]], the Heroes 4 Hire had discovered and fought an enclave of priests from the cult of the ‘Elder Eye’. Their worship centered around a great obsidian obelisk veined in the same mauve and purple, and affixed on each of the four sides with this same, inverted, double pyramid symbol but with the addition of a single eye staring from the symbol’s center. The motif of the dark stone veined with purple streaks that seem to shift and move when not directly observed, also was seen before… all the way back to the Shrine of Evil Chaos in the caves north of Hellespont.

Revelations of connections aside, the party investigated the room further, finding nothing else of interest, and then returned to Slaggoth’s journal for potential clues. Thia decided to give “oh, it’s a button” a try, and reached over to one of the symbols on the wall and gave it a push. In the center of the room, a purple glow appeared and quickly grew to encompass a 10’ diameter circle, stayed for six seconds, and then winked out. A repeated push repeated the process. Illyia decided to test the purple glow by stepping into it while it remained, and was nearly frozen stiff for his troubles. Thalolan experimented by standing in the middle of the spot before someone pushed a symbol, and suffered the same result when the event was activated.

Again the Heroes returned to Slaggoth’s journal to look for hints and clues. Previously, a crescent-shaped doodle with the word ‘wail’ carelessly scribbled underneath it in the margin of a page was thought to be a expedient sketch of a waning moon, and a reference to lupine howling. However, on closer examination, it was decided that the doodle could be a horn of some type, and the ‘wail’ scribbled underneath either a title or a suggested action. Either way, it became abundantly obvious they were missing a key to the puzzle… as well as clue, a very powerful clue, as to what the “Dark Priest” took off of Slaggoth’s mummy back in Rybalka. The team gave up on this particular endeavor, and returned to the surface to await their quarry.

After a fortnight, the daily Scry paid off. During the ten minutes of observation, Lt. Diplo Norixius watched the “Dark Priest” ride into a town, a well-sized town, and approach the announcement board installed in the center of the square. From the items posted on the board, Diplo got a name… Tingerhof! Tingerhof was a coastal city in the country of Gilder, far in the south of the continent. The weeks and weeks of observation, thinking the “Dark Priest” was approaching the Forgotten Temple of Tharizdun, were for naught, it appeared. Since his last known location in St. Aurelius, near Five Rivers, the priest had turned south now that he was on the western side of Morytania, and the length of time they had observed nothing but grasslands and occasional forests now made sense. But why, when he went to all the trouble of finding out about the Temple and raiding Slaggoth’s research and artifacts, was he now diverting to a new city?

And, they were now over a thousand miles away from him. The team had been keeping the rest of the Heroes 4 Hire, namely Dajjal, Calyx Siannodel and Greves, updated regularly via their Earrings of Communication, and it was Dajjal that came to their rescue. After a heated discussion of courses of action, it was agreed that Dajjal would get to Tingerhof as fast as he could and surreptitiously tail the “Dark Priest”, to keep tabs on his whereabouts and ascertain what he was up to.

Dajjal grabbed his gear and went to see Master Kozar Ven. After describing his needs, Master Ven took the rest of the day to make some arrangements, and the next morning used a Teleportation Circle to send Dajjal and his horse to the permanent circle in the compound of the Library of Allendretta, on a bluff overlooking Tingerhof. Dajjal, leading the horse by the reins, stepped out of an intricately constructed stone outbuilding housing the circle, and was met by an ornately dressed tiefling woman…

…and her wand at the ready.

What motivation drove the “Dark Priest” to turn south and head to the port city of Tingerhof in the land of Gilder? What will Dajjal discover as he tails the villain? Where will the Heroes finally meet their target for an epic final showdown?