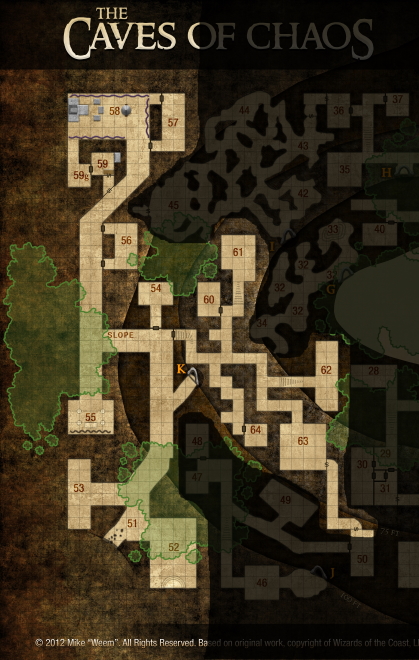 The Heroes 4 Hire awoke just after dawn, grabbed some breakfast and then headed back to the ravine and the Shrine they had discovered the day before. When they arrived, the team snuck into the large hallway where they had encountered the eight zombies, but found no trace of their previously vanquished foes. They turned north and scouted, stealthily, until they came upon two doors, neither locked and one with a sliver of light coming from underneath. Krinae Nilok quietly opened the door without being noticed, and the party bummed rushed five Dark Acolytes who were caught completely unaware and flatfooted. The few that attempted to resist were cut down quickly, and the two who surrendered were questioned and then executed.

The Heroes searched the room and bodies for loot and secrets, and then proceeded further along the main hallway thoroughfare, deeper into the Shrine. They came upon an imposing chapel with a checkerboard floor of ebony and scarlet stone. A tapestry on the south wall depicted a desolate landscape of dead trees and barren rock with a gruesome scene of demonic silhouettes holding aloft a struggling child in the foreground, against a gray sky torn by wisps of purple clouds and a bloody moon with a skull face and a single burning eye, leering over all.

Four black pillars supported a domed ceiling, and between them, just in front of the tapestry, was a stone altar of red-veined black rock, rough-hewn and crusted with untold years of dried blood. Upon the altar were four ancient bronze vessels — a shallow bowl, a pair of goblets and a vaselike pitcher — all glowing with an ugly purple aura. Ryoun was the first to touch the vessels by picking up a goblet… and then immediately putting it down and recoiling as if he had touched something hot. Convinced, he warned his colleagues that the items were cursed and had nearly taken him.

Before anyone could do anything else, a great bell sounded twice, somewhere in the complex, and the Heroes 4 Hire took up positions and prepared for combat. They were not disappointed, for a few moments later four Dark Adepts came running, and a range fight broke out in the entrance to the Evil Chapel. The adepts fell quickly to the party’s archery and spells, but before the team could catch its breath, the footfalls of an approaching army marched their way. A Dark Priest, backed by 10 skeletons and 10 zombies, approached and had words with the party. He asked what they were doing in the Shrine of Evil Chaos, who they were and why they were destroying his property… and not liking their answers he summarily sentenced them to death, to be followed by undeath once his minions made them so. And with that, he left them to be shredded and smashed by the skeletons and zombies, and returned to elsewhere in the complex. 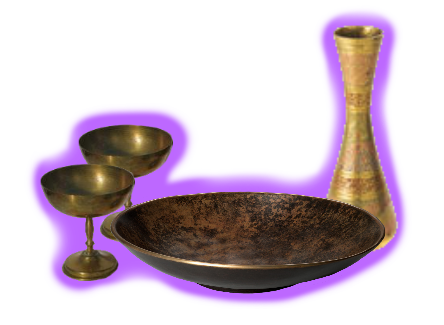 Heroes 4 Hire had other intentions. The team dove headlong into the fray against the undead, and were holding their own fine, until Dajjal grabbed the Unholy Relics of Evil from the altar for some unknown reason and made a mad dash through the congested battlefield toward the Shrine’s entrance. Not sure what he was up to or why, Diplo moved to follow and provide blocking and protection to Dajjal as he fled. Diplo’s interference was successful, but as Dajjal rounded the corner and ran out the entrance to the Shrine, a zombie slammed down on Diplo…

Seeing their colleague fall at the feet of the undead, the party rallied and rallied hard, crushing the remaining zombies and skeletons in moments… except for the four that continued pursuing Dajjal out of the Shrine and off into the woods. The party, faced with the decision to either pursue their fleeing traitor or collect their fallen comrade, optioned for the latter. They fashioned an expedient litter, picked Diplo’s corpse up out of the muck of destroyed zombie flesh and skeleton bones, and headed back to Hellespont. As they departed the cave mouth, they left into the darkness and drizzling rain, to slog the miles back to the village pallbearing their near-300 pound dragonborn paladin.

Dajjal, however, ran north from the ravine as fast as he could, and kept running for several hours with the Unholy Relics of Evil stuffed in his bag. Four hours after he stole the Relics and ran, Dajjal succumbed to the curse and stopped running. He stopped, turned around and began walking back to the Shrine of Evil Chaos, now a fully complicit denizen of the Cult. And his four undead pursuers, stopped pursuing and returned to their storage chamber in the Shrine.

What is the Dark Priest’s plans and the Shrine’s purpose? Why did Dajjal betray his friends and abscond with the Unholy Relics of Evil, leaving them to die at the hands of the undead? What will the Heroes 4 Hire do with one of their paladins dead, and their warlock deserted?