The Heroes 4 Hire awoke shortly after dawn on Wir, 11 Ayre 3E998, to get an early start at resupply and other errands, in an attempt to return to the ravine as early as possible. They arrived a little before noon, and decided to reenter the gnolls’ lair through the now-vacant Shrine of Evil Chaos, and did so through the secret passageway into the gnoll pack lord’s chamber where they had exterminated him and his mates the previous day. 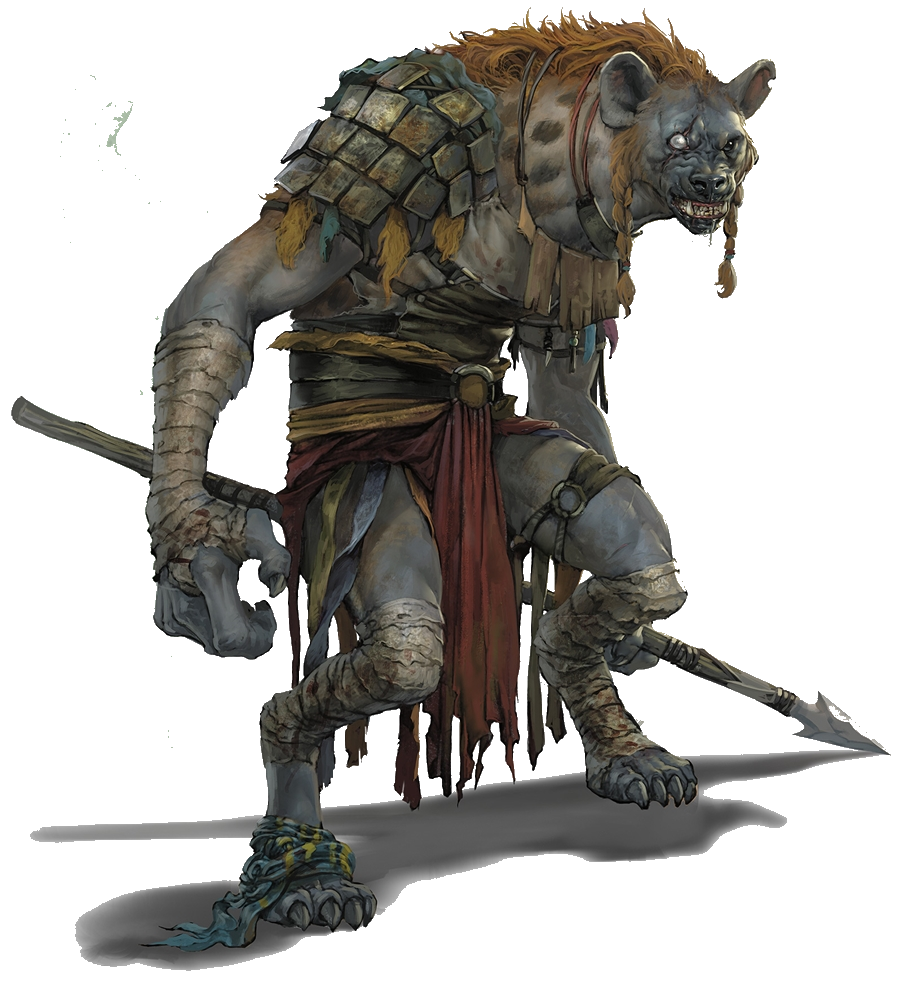 Illyia and the newest member of the Heroes, Thia, scouted ahead stealthily towards the main quarters of the gnoll tribe while the rest of the team waited. Luck would have none of it, however, because an errant step bumped Thia into Illyia, and metal tinked on metal. Even such a quiet violation of noise discipline was enough to alert the fine-eared gnolls, and the fight was on.

The T-intersection at the hallway entrance became a roller rink as Illyia dropped a bag of ball bearings, and the paladins, Diplo and Calyx, and fighter, Ryoun, turned that spot into a bottleneck to keep the team from getting swarmed. A grand melee ensued, with Thia dropping back to range arrows from beside Dajjal as he peppered away with spells, and Beeblebrox weaved through legs to pummel preoccupied puppies. Two gnolls made it through traffic to run down the hall and alert guards from the front entrance. The crowd control started to break down and Calyx, Thia and Illyia set up a new defensive line in the hallway beyond the intersection, to contain the fight on two fronts. One gnoll managed to pounce on Calyx and begin mauling her while she was down, but the rest of the gang finished cleaning up the first pocket and rushed to the new front to finish off the remaining mangy beasts. Wounds were mended, the lair was searched and looted, and a short rest was accomplished before continuing on to a new cave in the ravine.

The new cave was an interesting one, across the ravine and half way up from the gnolls. The party noticed a moment of disorientation and a little nausea as they crossed the threshold of the cave mouth, consisting completely of natural caverns unlike the rough hewn tunnels of the goblins, orcs and gnolls, as well as the perfectly polished construction of the Shrine. The queasy unsteadiness passed almost as quickly as it had started, and H4H continued. The caverns twisted and turned, passing through a chamber filled with stirges that were dispatched easily, making several turns at junctions, until it finally dawned on them that they had no idea where they were or how to retrace their steps. Beeblebrox started marking their route by pounding a piton into the right hand wall at every junction, showing not only which turn they made but which direction they were heading. Several hours of wandering passed, but the gang finally happened upon a piton at a junction, in the left hand wall, indicating they had somehow circled around into a passage they had traveled before and heading the opposite direction. 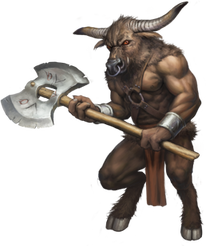 It was then that Dajjal and Beeblebrox managed to overcome the Labrynthian Curse. It was also now that the team heard someone… or something… creeping up on them from down the path. A quick, two-side ambush was set up, and then they went quiet to wait for their stalker. Listening to the creeper’s footsteps, they heard him stop, and then recede. Tense moments passed in silence… and then a minotaur rushed into one side of the ambush, surprising the party and nearly goring Beeblebrox to death. The team swarmed the bull and started trading blows, but the minotaur took Ryoun out with a single, splitting cleave from his greataxe. Diplo saved the fighter with a timely Lay On Hands, and when Ryoun came to he came to angry. A flurry of rapiers, critical hits and an Action Surge, and Ryoun singlehandedly removed the remaining life from the minotaur and posted the highest damage-in-a-single-round score of the whole team.

Now oriented and clearheaded, the team searched the rest of the cave, finding the minotaur’s den and stash, looted it and continued. They explored the remaining cavern complex, harvesting two nests of giant fire beetles for their glands, and discovered a secret entrance into a passageway that led to yet another backside of a secret door. Against protest Ryoun attempted to crack the door open quietly and failed miserably, and a huge bugbear and his mate were found, perturbed, on the other side. Illyia rushed forward and slammed the door in the bugbear chieftain’s face, but the chief simply opened the door and stepped in to smash his trespassers. Albeit close quarters, the chief didn’t last long as the Heroes put a vicious beat down on him, but when they stepped over his corpse to see about his mate, she was nowhere to be seen and the chamber door (the not-secret one) was swinging limply in the breeze.

Heroes 4 Hire decided that they had had enough for this outing, and chose to retreat back through the minotaur cave at a dead sprint. Several bugbears pursued through the cavern, and as the party emerged from the entrance they began taking incoming javelins from the entrance to the bugbears’ cave, obscured by a stand of trees and bushes just a short distance away. The gang kept running with bugbears in hot pursuit, up over the opposite rim of the ravine and due south through the woods and into the night towards Hellespont. It only took a few hundred yards out of the ravine before the bugbears, being notoriously lazy, gave up and returned to their lair. The team had suffered only minor injuries during their flight, but an argument erupted around Ryoun’s foolhardiness, and a short fistfight between Ryoun and Beeblebrox left Ryoun unconscious, tied up, naked, graffiti-ed and left to sleep it off in his bed back in the River Bend Inn. The rest of the team then hit the sack as the new day dawned (Zor,12 Ayre 3E998).

Will Heroes 4 Hire ever find the missing villagers? Will they find and explore all the Caves of Chaos? Will Ryoun remember having “Felt Deez Handz!”?