It was a rainy dawn as the five remaining Heroes 4 Hire, Alton Beeblebrox, Caylx Siannodel, Krinae Nilok, Ryoun Rodri and Shazana Keteeryn, returned to the hamlet of Hellespont, carrying their fallen comrade Lt. Diplo Norixius. As they slogged down the road past the northern farms burdened under weight of the paladin’s corpse, a familiar horn sounded… one of Thorbald’s deputies signalling their return… with casualties. The response was slow, but definite: a cart was brought out to meet them, Father Tristan accompanied by his acolytes along with it, the body relieved of its carriers and taken to be prepared for burial. 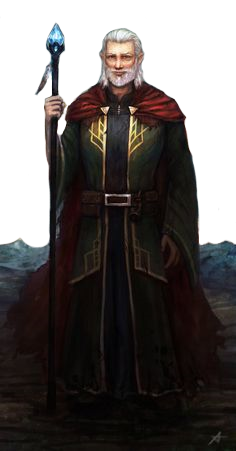 The Heroes requested Father Tristan perform a Resurrection, and told him they would pay whatever price was necessary. Tristan informed them that he didn’t have the necessary material components, and that they would have to find them somehow for him to be able to perform the task. The team spread out amongst the town to seek out the item they needed while Nilok maintained a vigil with the body, and Ryoun broke the news of Diplo’s demise to Jolene Hellen. The news hit her oddly; she retreated into her home for a moment to collect something before hustling to the chapel.

Krinae Nilok meditated in the pew closest to the altar and Diplo’s corpse when Jolene burst into the chapel, slapped a large diamond into Tristan’s hand and demanded he get to work. The team provided the rest of the offerings, and Tristan performed the ritual. Long, agonizingly slow moments passed without effect, and eventually it appeared the Priest of Bahamut had given up all hope. And then Lt. Diplo Norixius sat straight up on the altar and looked around confusedly, and all was well in the world.

Well, almost all. Dajjal was still missing with the relics they had discovered, and a Dark Priest was still amassing an army of the undead inside the Shrine of Evil Chaos, just a league or so north of town. And, for some odd reason, Krinae Nilok was now insisting that his colleagues refer to him as “Illyia Baham”. There was much to be done. The team rested and once resupplied, returned to the Shrine for some answers. They quietly intruded through the main hallway where the massive battle occurred that claimed Diplo’s life, stepping over the destroyed zombies and skeletons and Dark Adepts, and discovered the Relics of Evil had returned to their original place on the altar in the southern Chapel. This time, they left them alone.

The team moved up the hallway, searched the Adepts’ chamber and then continued north until they came upon the Temple of Evil Chaos, the dark heart of the Shrine complex. They searched the foreboding altars, the large kettle-bell and hammer, the three thrones, the tapestries… and Ryoun again proved iron-willed as he observed a group of dancing swirls on the wall behind the thrones and yet another curse made a failed attempt on him. He warned his fellows of the danger, and the party heard footsteps approaching from down the hallway from which they came. They hastily prepared an ambush, but held their attack when Dajjal rounded the corner. He was surprised for a moment, then made a sprinting attempt to get to the kettle-bell to sound the alarm. His former teammates dog-piled on him and beat him unconscious well before he could get there.

They snapped Dajjal in manacles, and being a spellcaster they gagged him as well. He began to wake up almost immediately after they had bound and gagged him, and they beat his skull until he was unconscious again. Noise from behind one of the tapestries betrayed that more zombies were coming from a concealed door, and the team again moved to set up an ambush. Four more zombies shuffled forth through the tapestries, and the Heroes 4 Hire crushed them in short order. Further searching behind the tapestries revealed another concealed passageway in the opposite corner, complete with more sounds of approaching undead.

The party set up a front at the opening of the passage, and “Illyia” dropped a bag of ball bearings, and the three approaching zombies performed several slapstick prat-falls as the team took full advantage of their vulnerability to destroy them. Some of the team then moved past the ball bearings into an well-appointed antechamber and searched while the rest collected Dajjal and prepared to return. Beeblebrox and Ryoun checked the last door, and discovered a plush bedchamber to search. Beeblebrox heard footsteps receding faintly from the southeast corner, and discovered a secret passageway concealed behind the back panel of a wardrobe, and he pursued.

The hidden passageway exited through a secret door into the main hallway of the Shrine, a little south of the Temple near the Adepts’ chamber, and Beeblebrox just caught a glimpse of the Dark Priest running around the corner toward the Shrine’s entrance as he came out of the secret door. He yelled to his teammates of the Dark Priest’s escape, and the chase was on! Beeblebrox and Illyia used their superior speed to start closing the distance on the Dark Priest, but after a turn down one intersection and then another, they could not hear his running footsteps any longer. They came around the corner to a spot of absolute silence, where they could neither hear themselves or each other… and it shortly dawned on them, that the escaping villain had cast a Silence spell on the spot, precisely at the intersection of four possible escape routes.

They checked all the different directions, found the edges of the spell where they regained sound, but by then the Dark Priest was long gone, for one of those four options was out the main entrance, out of the ravine and into the woods. They had failed to apprehend him.

And so the Heroes 4 Hire were reunited, although it begrudgingly. They carried Dajjal, unconscious and well beaten, all the way back to Hellespont where they had Thorbald incarcerate him in the one-cell jailhouse, leaving him manacled and gagged, and then the team went to bed for the evening.

Where did the Dark Priest escape to? Where are the missing farmers? Why was Dajjal ‘one of them’?