The Heroes 4 Hire awoke and headed back again to the ravine and the Shrine of Evil Chaos. Having cleared out most of the Shrine on previous outings, the team immediately went down the stairs to return where they had left off the day prior. They found a door in one hallway barred from the outside, their side, as if to keep something in. Upon opening, they discovered a mausoleum with six sarcophagi, which they decided to search for possible loot but found very little, until Calyx opened the sixth one. A Wight sprang forth and tried to embrace her in a soul-sucking kiss, but she immediately repelled him and the team went to work, killing him in extremely short order. 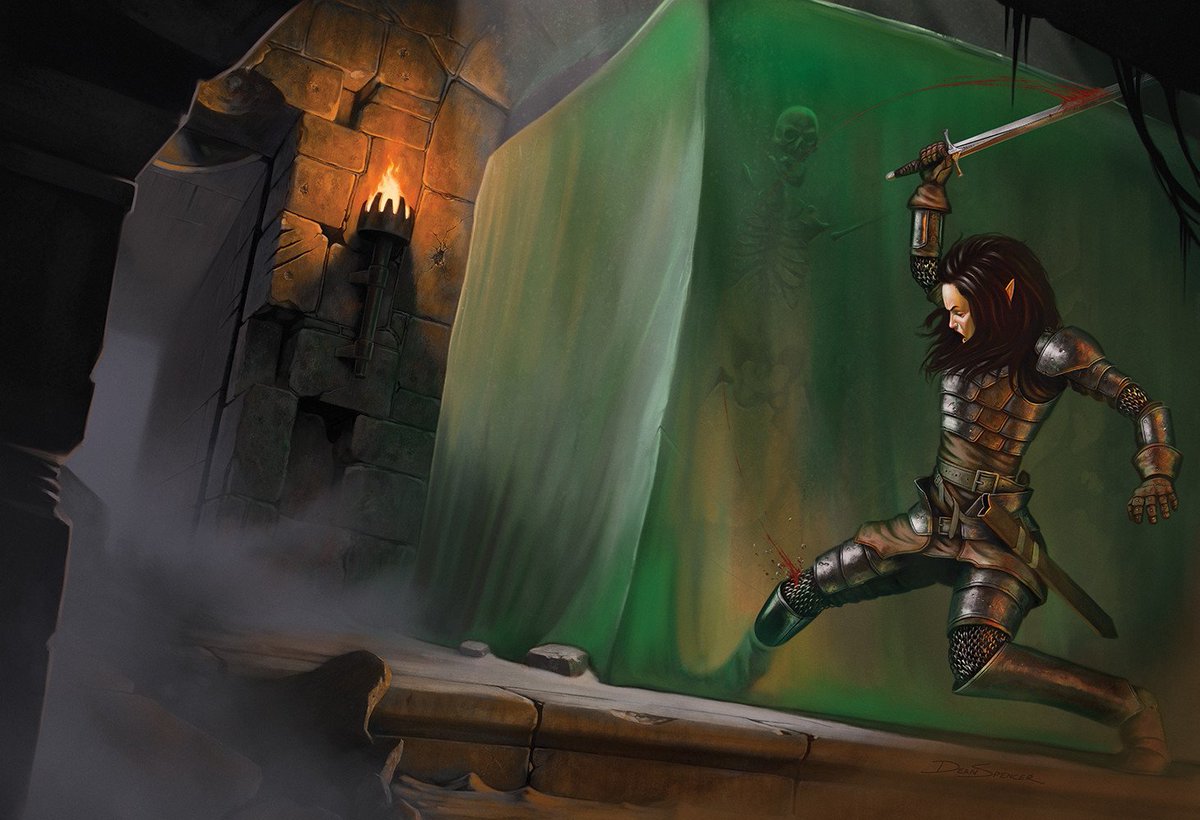 Next the Heroes moved in to search a large storage chamber filled to the brim with crates, barrels and boxes full of all sorts of supplies and provisions. As the team searched, Beeblebrox rounded a corner between rows of crates and bounced off of a gelatinous cube that everyone had failed to notice. Apparently, the cube found halflings to be exceptionally tasty, because the giant ooze gave chase to the fleeing hobbit. Dajjal began blasting away at it as Beeblebrox ran, and as the rest of the group were able to bring their ranged weapons to bear the cube was vanquished with a squish. They returned to the search, and discovered a secret door in the back of the storage chamber that lead to a secret hallway.

The team waited behind while Illyia scouted ahead in the secret hallway, and discovered the remains of an old adventurer long dead… presumably one of the original party dispatched to handle the caves 20 years ago. The passageway led to the back of another secret door, which Illyia quietly opened a crack and observed a huge gnoll and his 5 mates in the chamber beyond. Illyia stealthily closed the door and gathered the rest of the party, who prepared for a surprise attack and then rushed the gnolls. The surprise worked, for apparently the gnolls had no idea about the secret door, and perished quickly. A quick search and looting of the room and bodies was conducted while the door leading to the main hallway was guarded, but it appeared as no one heard the fight. Heroes 4 Hire decided that it was enough for today, and retreated back through the secret passageway, closing the door behind them, to return to Hellespont for an end to another successful foray into the caves and a good night’s rest.

Will the Heroes succeed in their mission to recover the missing farmers? Will Calyx stop kissing the undead with tongue? Will Jello decide that there’s always room for Beeblebrox?