"Shouldn't I be the one following him?" 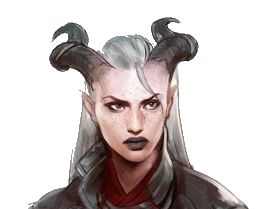 Master Kozar Ven used a Teleportation Circle to send Dajjal and his horse to the permanent circle in the compound of the Library of Allendretta, on a bluff overlooking the Gilderian coastal town of Tingerhof. Dajjal, leading the horse by the reins, stepped out of an intricately constructed stone outbuilding housing the circle, and was met by an ornately dressed tiefling woman…

…with her wand at the ready.

Her skin was pale and freckled, her hair stark white and long, draping down her back from between two dark gray spiraling horns on her head. She was dressed in a sophisticated, high-collared dress as white as her hair, long sleeved and bespoke of culture and education. The wand stayed readied at her side, but she spoke directly, “Who are you and why are you here?”

Dajjal quickly introduced himself, explained his relationship with Master Ven, and summarized his mission to Tingerhof without giving too many details. The tiefling woman introduced herself as Allendretta, owner and master of her grand library. She was flanked by a large man-at-arms reeking of competence and discipline, and introduced him as her bodyguard, Stagarm Woodash. She showed him around the grounds outside the towering spire, ornately gardened and with an impressive attention to detail. As they walked, she explained that her library was open to all students of magic, as long as they abide her rules: respect her library, her, the staff, and all books remain on the premises. 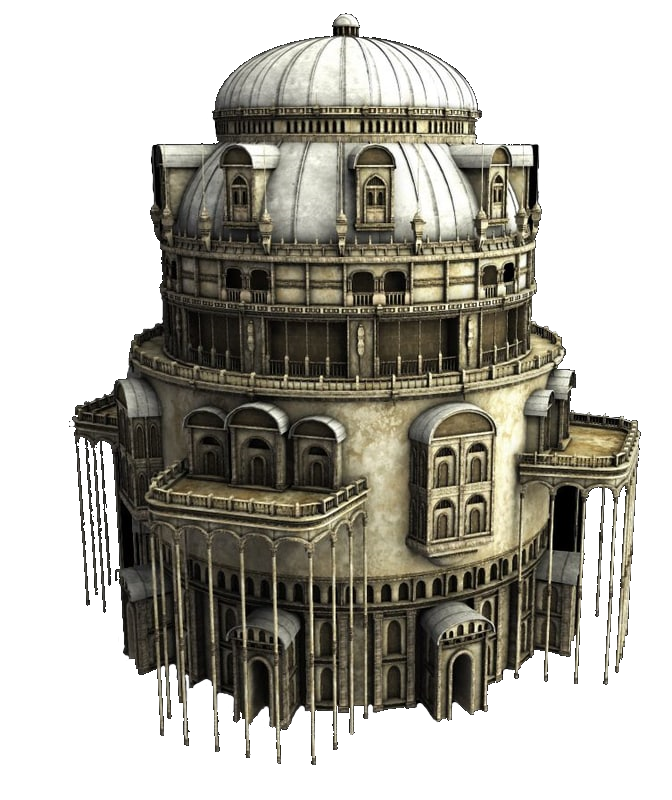 The Library sat upon a wooded, prominent hilltop overlooking Tingerhof proper, a steep, switchback footpath serving as its only approach. The spire itself rose skyward in squat, halfling architecture, the first four floors housing the Library proper, the basement and fifth floors housing Allendretta and her staff. The foyer opened to a huge colonnade staircase leading to the second level, railed balconies looking down from the upper floors. Bookshelves stuffed full ran floor to ceiling on each floor and reached from the circular exterior walls into the space like the spokes on a wagon wheel. The construction was marble and fine woods, all polished to a mirror finish. Plush carpeting and tapestries softened the interior spaces, giving the Library a warm and cozy feel, albeit decidedly academic.

Dajjal thanked Allendretta for her time and the tour, and the departed out the wrought-iron gate and down the path into Tingerhof itself. He found an inn nearby and purchased a room, worked the innkeeper for any rumors or information regarding the Dark Priest, and then proceeded to wander the township from inn to tavern to market in a futile effort to find his quarry. Once he had given up, he returned and spent the rest of the day in the Library, searching and researching through stacks of tomes on ancient cultures, cults, rituals, and his own personal project, necromancy. As he worked his way through the list of interesting titles he compiled from her library catalogue, he discovered one title, Ancient Rites of Ancient Cults, was missing from its place on the shelf. A short search convinced him that it was not misplaced, and not currently being used by another student. Having completed his research for the day and concerned that particular book was missing, he took a moment to leave Allendretta a note:

Dearest Allendretta,
Thank you for allowing me to utilize your library. As a fellow tiefling, I understand your hesitation to trust me; I may not be an “open book,” but I will reveal to you anything to do with my investigation here, so long as I can rely on your secrecy.
Speaking of the investigation, in my first look at your marvelous library today, I noticed that one of your books are missing. I even took a look around to see if anyone may have taken it, but didn’t find it. And based on the rule of your library that no book shall leave I believe it my duty to notify you. Curious enough, the book in question is one that pertains to what I’ve been looking for, which gives me even more reason to tell you.
I shall be back soon. I hope this book problem is nothing. Also I would love it if you joined me for tea tomorrow, to help break the tension a little.

Dajjal departed the Library and descended again into Tingerhof below, returning to the inn and settling down to a nice dinner. It wasn’t much more than an hour since his departure before he found his meal interrupted by Allendretta and her bodyguard, her posture belying frustration and impatience. “Which book?” she demanded.

Back to her Library, Dajjal assisted Allendretta and her staff in a systematic search, until the missing book was eventually found… conspicuously misfiled in a different section of the Library, as if to keep it from being taken by someone else. A short discussion ensued, and Dajjal showed Allendretta his Peering Mirror, asking for permission to use it to surveil the section in hopes of discovering the identity of the mischief maker. Allendretta agreed, and Dajjal placed one of the coordinating tokens on a wall, directly observing the misplaced book where it was shelved, before activating the token and turning it invisible. He showed Allendretta the mirror’s reception of the Arcane Eye token’s signal, arranged to meet her before the Library’s opening the next morning for breakfast, bid her a good evening, and departed to return to the inn for a night’s rest.

The next morning, Dajjal hurried before sunrise up the twisting path to the wrought-iron gate, pulled the cord to the visitor’s bell and was let in by the butler, an older gentleman he had met the day before. He was escorted through the foyer and into the kitchen, where he found Allendretta sitting on a stool at the island counter, sipping tea and breakfasting on fruit and pastries, all the while chatting pleasantly with the cook. The cook was a plump and amiable human woman in her early forties, a swatch of ruddy hair peeking from beneath her chef’s hat that matched her pinkish complexion. She and Allendretta were chuckling as they shared her cooking, and they invited Dajjal to join them as he entered.

Dajjal took the stool next to Allendretta and laid the Peering Mirror on the counter between them. Allendretta’s more reserved nature took over, and mood of the kitchen quieted from boisterous to friendly. The pastries were delicious and the tea was warm and inviting. They stayed there in the kitchen, enjoying the wares and the conversation for several hours, well past the opening of the Library for the day, until their vigil at the mirror finally produced a perpetrator.

A sandy blonde youngster, maybe 20-something, that Dajjal had passed as he departed the Library the previous morning, still wearing the same cap, approached the bookshelf where the tome was stashed and removed it, unaware that he was being watched. He walked out of the field of view of the Peering Mirror’s token, but by then Allendretta and Dajjal had inconspicuously climbed the colonnade stair to the second floor and approached to within visual range. They nonchalantly shadowed the young man as he took the book to a study table, and took up a position on the other side of a bookshelf directly behind where he now sat. They watched as he opened a notebook and continued to scribe annotations he had obviously began the day before, reading and researching just like any other student.

Allendretta questioned Dajjal, unsure that this was anything more nefarious than a student too lazy to return a book according to her system. Dajjal was suspicious but uncertain, so he asked if Allendretta could do something to break the metaphorical stalemate. She walked around the bookshelf examining its contents until she was standing about ten feet behind the student, surreptitiously drew her wand and made a slight flourish low near her waist, so that none but Dajjal would see. Suddenly, Dajjal felt as if he was struck blind in his mind’s eye, like he had lost touch with his patron and as if magic no longer existed in the world. Right before his eyes, however, the sandy blonde youth suddenly changed into the middle-aged Dark Priest, raven-haired and dark-eyed, and looking confused as to why his disguise disappeared. He looked around, concerned but as nonchalantly as possible, did not realize that Allendretta and an Anti-Magic Field was responsible, abandoned the tome, collected his notebook, removed the cap from his head and departed the Library as inconspicuously as possible.

Allendretta returned to Dajjal on the other side of the bookshelf, surprised at the events that just unfolded. Dajjal thanked her for her help and prepared to shadow the Dark Priest, but was interrupted by a telepathic interjection from Luna, “Shouldn’t I be the one to follow him?” Her tone was sarcastic and patronizing as usual, but Dajjal agreed and sent her to follow the villain.

Dajjal took out his own notebook and sat down with the tome for an extended period of time, taking copious notes over the remainder of the morning. He found the Dark Priest was researching detailed descriptions of rites associated with the Cults of The Chained God, a description of a central temple of worship and how to get into its Undercroft and ‘Black Cyst’, as well as another dog-eared page about a resurrection ritual that can bring the soul back against its will. When he felt he had exhausted the pertinent items, he joined Allendretta for lunch while Luna shadowed the Dark Priest.

What will the Dark Priest do next now that his ruse has been discovered? Does he know that Dajjal is on his tail? Will Allendretta prove antagonist, or ally?