With no further sounds of approaching enemies, the Heroes 4 Hire began to search, loot and clean up the upper level of the Forgotten Temple of Tharizdun by dragging the piles of bodies outside and burning them in one gigantic pyre. They quickly questioned the captured norker witch-doctor once he had regained consciousness, gaining a small amount of intelligence about the lower levels, and then Alton Beeblebrox dispatched him with malicious aforethought. The team took quick inventory of their health, spells and abilities, and opted for a long rest before attempting to remove the hill giant corpses blocking the stairwells to the levels below.

Once rested, the Heroes attached a series of ropes to the dead hill giant blocking the eastern stairwell, and with great concerted effort managed to slide the giant up and out of the confined space, sliding him out into the middle of the basalt floor. They cautiously proceeded down the stair, slick with the blood and vitriol of the deceased denizens of the Temple. At the base of the curved stair, they found more of the same dull, dark gray basalt construction, carved into impressive columns and long halls of a massive cathedral. They explored room after room along long, wide halls, finding the quarters of the various occupants they had just slain earlier in the day. Most rooms were empty of anything noteworthy, just nasty bed chambers of trolls, gnolls, giants and norkers. 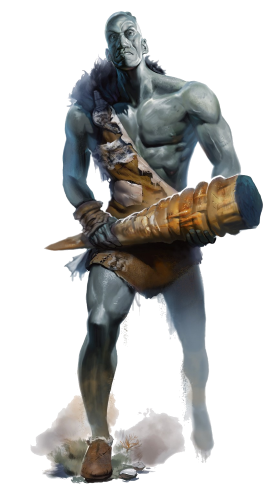 As they finished clear the east side of the lower floor, they came upon the bed chamber of the leader of the temple’s denizens, and along with it several chests of plunder the impromptu ‘tribe’ had collected over time. They looted the coffers, and discovered that they had recovered a respectable sum of coin, gems and trading bars, but that there also appeared to be a chest or two missing… based on the geometric shapes left bare in the surrounding dust and grime. They continued their search, and as the colonnade swung around from the eastern half to the western half of the lower level of the temple, they discovered the southern star leading to the dungeons below, that the witch-doctor had described.

The party had yet to discover the “hidden closet” described in Slaggoth’s journal, but still abandoned their search and detoured down the stairs to the dungeons.

They descended the long staircase several hundred feet into the dungeons that the witch-doctor had described as “none but Groorg the Cunning dared to step foot.” They first entered a 20′×20′, high ceiling chamber with a massive central pillar and 4 giants idols carved in relief into it… each of a different color and design and facing in one of the four cardinal directions. Illyia Baham cast Detect Magic, and the entire pillar radiated a strong source of uncategorized magic, as the entire temple proper radiated a very weak aura as well. The team decided to leave it well enough alone, quickly searched the attached storage rooms full of garbage and rotting foodstuffs through the doors of the same chamber, and then chose to proceed along the grand, colonnaded hall to the north.

After fifty feet the hall opened up and divided east and west around a shrine in the form of an huge ovoid pillar spanning from floor to ceiling, more than 10’ thick and 20’ long. In the exact center of the east and west faces, in a carved, recessed alcove, stood a giant black statue of a shrouded, man-like figure holding a bowl in front of it. Water seeped down the faces of the figure, running drop by drop as if they were tears, coursing along the chest to a trough made by the arms, and then into the bowl, having left a slight deposit of reddish mineral over the years. The overflowing bowl steadily dripped into another bowl-shaped recess in a smaller, spherical with sun-ray shaped statue at the feet of the larger robed figure.

Naïlo Thia stuck her hand in the water in the small bowl, and experienced a strange tingling sensation but experience no other apparent effects. Illyia then dipped a finger and tasted it, finding the same sensation and result. Thia then drank a good portion, again experiencing the tingling, and then the party lost any remaining interest in the shrine and moved on to the north. Nearly a hundred feet farther, they found a small v-shaped widening of the hall around an odd diamond-shaped pillar, each face having bold relief of a male figure. The two southward faces had the same man in cowled robes, but the two northward faces had the man in plate mail with a strange helm and a great halberd. They party studied the column for a moment and then continued north.

Another fifty feet past the diamond-shaped pillar, the grand hall opened into a vast natural cavern, extending up and out well out of reach of Karraway’s Light spell. The stood for a moment in front of the opening a few feet into the cavern, discussing what to do next, when suddenly a boulder nearly three-feet diameter came sailing at them out of the darkness, narrowly missing Thia as she sidestepped at the last minute. A second boulder followed in rapid succession, skipping once off the floor before ringing off Lt. Diplo Norixius’ plate mail, knocking the wind out of him and felling him to one knee. The party scrambled and split, Thia and Illyia peeling off to the right along the wall, Erendriel Thalolan and Karraway to the left, while Beeblebrox, Ryoun Rodri, Diplo and Smedley Hampton charged up the middle in the direction of where the big rocks were coming from.

Toward the middle of the chamber, the party discovered a huge mountain giant, throwing boulders at them from a pile heaped just beyond another statue of a figure in plate mail and a halberd. As they closed on him, the giant turned and retreated to the west at a dead sprint, and the Heroes pursued, assaulting him with a hail of arrows ,weapons and even fists, in an attempt to bring him down. Smedley used his enchanted gear to Haste himself well out in front of the giant and near the southwestern wall, and the giant reciprocated by drilling him with another boulder and knocking him unconscious. Karraway and Ryoun hurried over to Smedley to render aid, as the giant made a full ditch effort to outrun his pursuers down the tunnel at the far west end of the cavern.

Even the extreme foot speed of Illyia proved not to be enough, and Groorg the Cunning successfully fled the escape tunnel out of the dungeons of the Temple, across an ash covered glade tucked in a pocket on the side of the western Sister, and over the side down a nearly invisible mountain path. The team regrouped, healed up and returned to continue exploring the dungeons. They found the area was seemingly, now, devoid of life, came across a small 4-cell prison block, empty of occupants and rotting and rusted. They continued down several corridors finding several old crypts filled with sarcophagi, and paused to debate whether to open and search them.

What other discoveries await the Heroes 4 Hire in the dungeons beneath the Forgotten Temple of Tharizdun? Will they ever find the ‘hidden closet’ referenced in Slaggoth’s journal? Can they discover what the Dark Priest seeks, before he arrives?