Pursuit of a Madman: The Ashen Wastes

With the image relayed to Dajjal back at Half Point, the Heroes 4 Hire returned to focusing on the journal they had risked so much to recover. Higgins, the former consort of Slaggoth recovered from suspended animation, assisted Ryoun Rodri and Illyia Baham decipher the text from Slaggoth’s ancient personal shorthand and transcribe it into Common. Late into the evening they worked, and after nearly four hours the journal revealed that Slaggoth had researched a lost temple to the Chained God, Tharizdun, complete with a map in the style of a pirate’s treasure map, where the directions are explicit, but the starting location is not specified other than with a cryptic hint.

Thinking the map was useless without knowing the starting point, Erendriel Thalolan added that they were holding the physical proof that Forgotten Temple had, in fact, been mapped. Not picking up on his implication, the team watched as Thalolan cast Guiding Hand, asked for the Forgotten Temple of Tharizdun, and the spectral hand pointed west. Assuming the Dark Priest was enroute there and easily had a month head start, they discussed their possible courses of action over a map of Caledonia. Using a general azimuth from Oxfront provided by the Guiding Hand , they looked at possible mountainous areas that could match the description in Slaggoth’s journal, and decided that anything east of Morytania was out, because he’d be there already and the Crystal Ball showed he was still traveling. The group decided a ship was in order, and Higgins informed them the nearest port lie a day’s ride north to the small town of Jotunheim. The next morning, they packed up the wagon and made the trip. 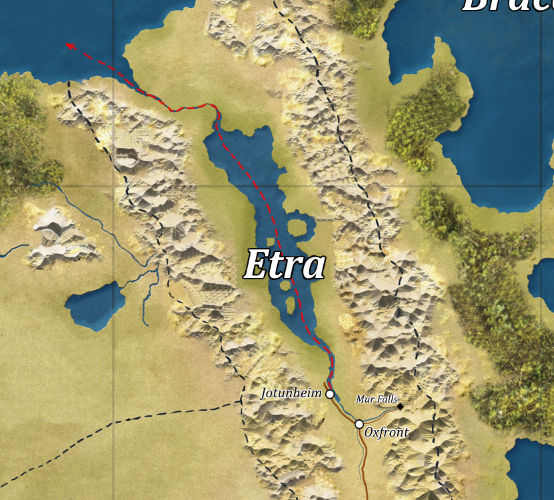 In Jotunheim, the Heroes 4 Hire chartered a barque named The Northwind to convey them, their mounts and their equipment until dismissed. They departed northward across Lake Etra, sailing four days until they exited into the Barren Sea, where they again took a bearing from Thalolan’s Guiding Hand and was reassured that the Lost Temple lay west. During that leg of the voyage, Dajjal contacted them and told them that he and Emen Benniel were able to track down the tapestry design Lt. Diplo Norixius had passed to him three days prior. The design was the logo of The Dancing Stag, an inn in the Tracian city of St. Aurelius, on the western bank of the intersection of the Five Rivers. 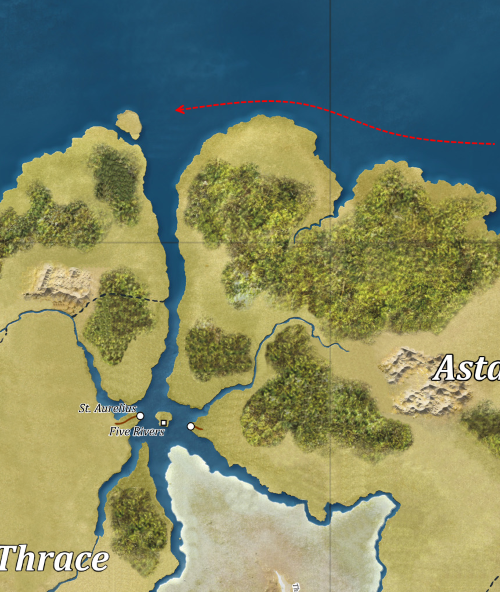 Six more days of sailing brought The Northwind to the mouth of Five Rivers, where the Guiding Hand again directed them farther west. They sailed four more days westward until they reached the northeastern shores of Evendim, and the Guiding Hand again pointed west, but this time a little more south. Another conference over the map table and they concluded the start point to Slaggoth’s map must be concealed in the Silverwood, putting the Forgotten Temple of Tharizdun hidden in the mountain range that borders Evendim with the Ashen Wastes. The team was faced with a decision to either sail to the extreme north around the lobe of the continent housing the Ashen Wastes, betting that the Temple’s location lay farther beyond, or to proceed in overland in anticipation that it lay in the mountainous border they thought. After a long discussion, the party decided to sail up the inland waterway into and across Lake Evendim. 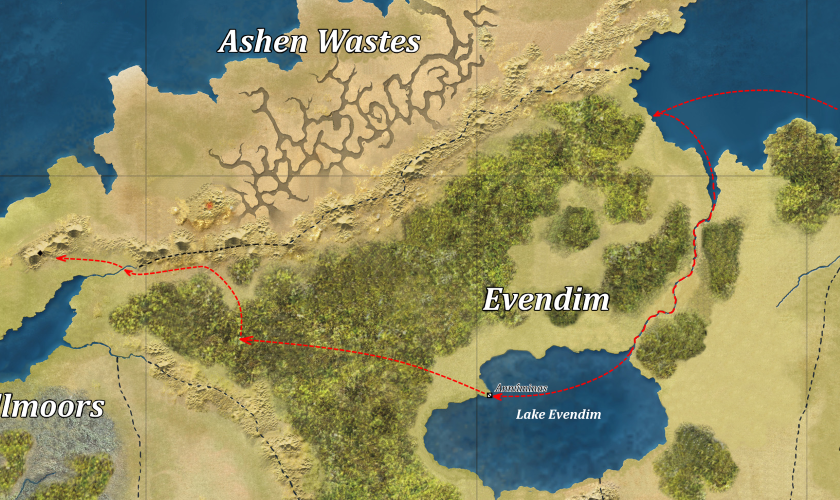 Once deep into Lake Evendim, the Guiding Hand again swung an azimuth back to the west-by-northwest, confirming their suspicions that The Forgotten Temple lay in the mountainous border of Evendim and the Ashen Wastes. Feeling happy in their choice of path to take, the Heroes had The Northwind put them, their mounts and their equipment ashore in the ancient ruins of Annuminas, the city of the long extinct Numinorians. There they camped the night in a dockside warehouse that was mostly intact, and departed northwesterly in the morning into the Silverwood forest along the bearing they had divined.

Shortly into the first day inside the Silverwood, Nightshade spotted a group of humans stealthily shadowing the party at a cautious distance, carefully remaining concealed but unaware of the raven circling in the canopy overhead. The group were dressed typically of woodland rangers, and operated in a closely coordinated squad. Illyia borrowed the Sword of Lyons from Ryoun and activated it, disappearing instantly. He slipped off his horse and silently circled back behind the trailing group and invisibly watched them watching the Heroes. He noticed that these humans were exceptionally tall, towering an average of eight feet, and were a mix of roughly half-and-half men and women. The mysterious squad tailed them for nearly six days, never closing and never breaking concealment, until they finally turned around and returned the direction they came.

The next morning when the Heroes 4 Hire awoke, they found a stranger standing at the northwestern edge of the small clearing they had set up as camp the night before. An elf of tall and lithe stature, clad in skins, furs and warpaint, stood comfortably leaning on a spear awaiting for the party to awaken. He addressed the group in Elvish, speaking plainly and clearly, but he held a gaze intently on only the elves in the group. He asked who they were and why they were here, and Illyia spoke for the group, answering his questions honestly. After a brief discussion, the stranger told them that his village’s totem might fit the description of the ‘start point’ mentioned in the text, but outsiders would not be allowed access across their borders. He also told them of an ancient village legend of a trek to the ‘Palace of the Whispered One’, along a route that leads northward from the village across the mountains to the great volcano, then turning westward to the eastern approach to a lonely cluster of mountains, and a treacherous path leading farther in.

He directed them to turn either due north or due south, and two days travel would bring them to the edge of the Silverwood, and then they could circumvent the edge of the forest and their territory to get to their desired destination. The party thanked him for his assistance and heeded his directive, turning north until they reached the northern edge of the Silverwood, then following its edge back toward the west-northwest until it brought them to the mountainous border of the Ashen Wastes.

The Guiding Hand had led them to the extreme west end of the mountain range that demarcated the border, where a river they were not familiar with flowed down from the foothills and headed west toward the sea. From there, the Guiding Hand was pointing northwest, and the Heroes concluded the Forgotten Temple of Tharizdun did not lie in the mountains of the border region, but actually among the distinguished trio of mountains in the extreme west of the Ashen Wastes famously known as the Three Sisters. The Three Sisters were not part of a range, but simply rose sharply and rocky out of the barren plain of ash and silt, towering to a height making them a prominent landmark visible for a hundred miles in all directions on a clear day.

The Heroes crossed the border at the river and rode the four day journey across the ashen plain, straight as the Guiding Hand directed them, until they reached the base of the Three Sisters in the evening. There, against the sheer cliff-faced foot of the middle Sister, they camped for the night.

BattleSystem: Something Different Test Drive your very own Army!