The Heroes 4 Hire seized the initiative and refused to give the squad of hobgoblin soldiers in the third-floor chamber of the west tower time to regroup and organize. Karraway and Lt. Diplo Norixius charged across the center wall parapet and began bashing the barred door with the portable ram. Illyia Baham followed, keeping hidden behind the battlements from the archers still positioned around the fort’s perimeter stockade. Alton Beeblebrox exchanged missile fire from the second floor through the broken trapdoor into the third floor chamber, but after hearing the sound of the portable ram he went to an arrow slit on the west wall and climbed up until he was hanging just below the sill of the third-floor arrow slit above. Dajjal and Greves, still atop the tower, prepared to open the trapdoor and pounce into the fray from above the room. 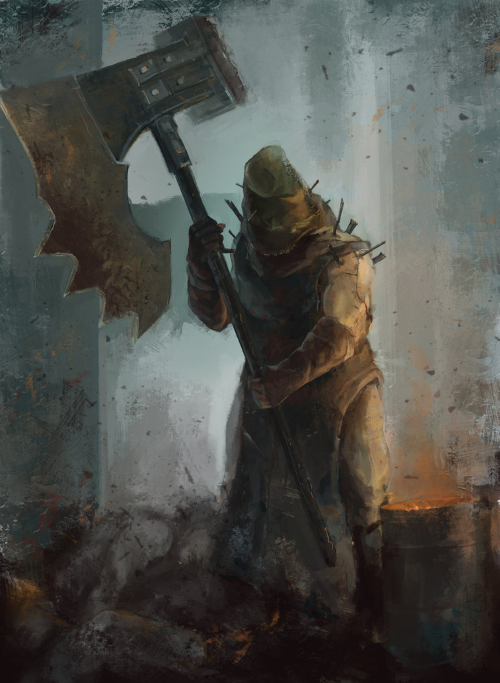 Several swings later, the ram splintered the door from its hinges, and the Heroes swarmed the room. Dajjal and Greves opened the trap door in the ceiling and dropped into the room, Beeblebrox sprang in through the arrow slit in the opposite corner and Diplo and Karraway charging through the bashed doorway. As Illyia prepared to charge, he noticed a large fighter in black plate armor and two-hander accompanied by an even larger barbarian-looking individual, bare-chested, loin-clothed with an executioner’s hood and a huge bastard sword, walking across the inner courtyard toward the ground floor entrance of the east tower. He yelled to his compatriots that they had a new threat coming in a few moments, and then went and laid his bear trap just outside the trapdoor that came up from the second floor. Illyia covered it with a Minor Illusion, making it look like the normal stone floor. He then took up an ambush position just outside the tower door to the center wall parapet.

In the west tower, the team smashed into the squad of hobgoblin soldiers hard. They focused on the sergeant and the lieutenant first, and in a few rounds they had wiped them out. The lieutenant had released another boggle, which started spider-climbing around the exterior of the tower looking for an opportunity to attack. However, as soon as it realized the squad, it’s captors, had been wiped out, it teleported out to the curtain wall, and then again completely out of the fort. The team then ran up to Illyia’s hiding position as the Black Knight and the Executioner arose from the trapdoor, each on one side. The Executioner moved first, rushing the door to engage the party on the other side. Standing over 9’ tall, the party estimated that it was an ogre under the hood. The Black Knight moved forward and stepped on the bear trap, but superior reflexes kept the trap from successfully gripping this particular bear. As the Executioner engaged the team, the Black Knight approached the door and commanded to be allowed to pass, and the Executioner stepped back momentarily to let him through the destroyed double doors and out onto the center wall parapet. 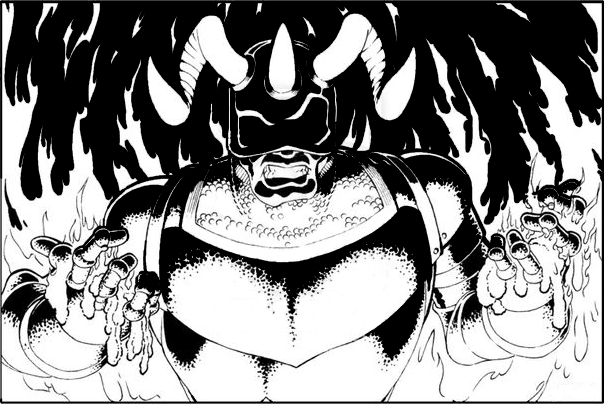 The Black Knight attacked the party at close range with his greatsword. Illyia noticed the Black Knight had no eye holes in the helm of his plate armor. The blind fighter attacked with blinding speed, swinging at Greves and then spinning around on Illyia, taking two swings at him and then again reversing back at Greves. Illyia shot the Executioner with his wrist dart, blinding him with the poison. The Executioner yelled, “Icar, they have blinded me,” and then charged out the door and across the parapet, knocking Greves from his feet and pushing the rest of the party aside. Icar, the Black Knight, continued attacking the team, and the Executioner spun around mid-span having cleared his vision. Karraway stepped forward a bit to the middle of the fray and cast Spirit Guardians, his celestial spirits encircling him and his comrades and slamming into to Icar and the Executioner.

Greves sprang back to his feet and re-engaged Icar as Beeblebrox switched targets from Icar to the Executioner. Icar fought bravely and viciously, but hopelessly outnumbered he eventually fell, followed shortly by the Executioner. The party looked around for any other assaults headed their way, and seeing none took to looting the bodies and searching the third level of the gatehouse wall and towers. They found coin in quantity, some jewels and jewelry and several magic items used on them by the defenders. Once the search was completed, they hunkered down in the west tower again and took a much needed short rest.

DM’s Note:
Current kill count: 98 hobgoblin soldiers, 6 sergeants, 2 lieutenants, 1 captain of the guard, 1 fort commander, 2 boggles…
Literally a knee-deep pile of dead hobgoblin soldiers on the third level of the gatehouse wall, on the east, west and center parapets and both towers.

With 18 archers remaining on the perimeter wall, will the Heroes 4 Hire attack them next or brave their hail and press the assault into the keep itself? What will they find inside the keep? What Secrets do the Slaver’s Stockade still hold?

Secret of the Slavers' Stockade: Storming the Keep "Think it'll work?" "It would take a miracle."

Secret of the Slavers' Stockade: Knee Deep in the Shit Quit touching me!!!