Secret of the Slavers' Stockade: Hunt and Peck

"Why does every bad guy have a medusa?" 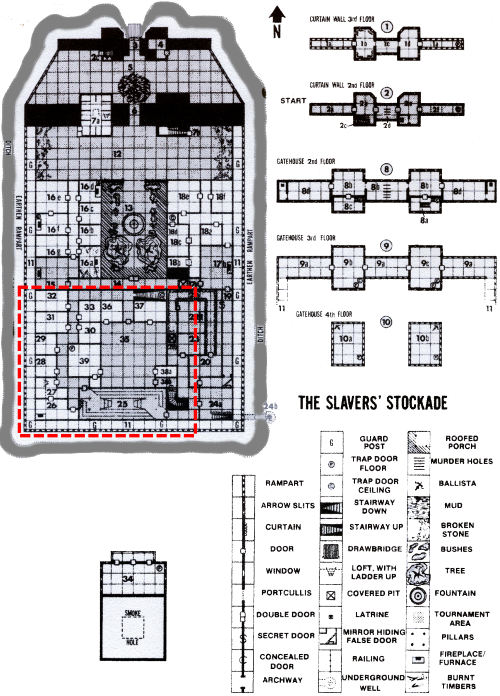 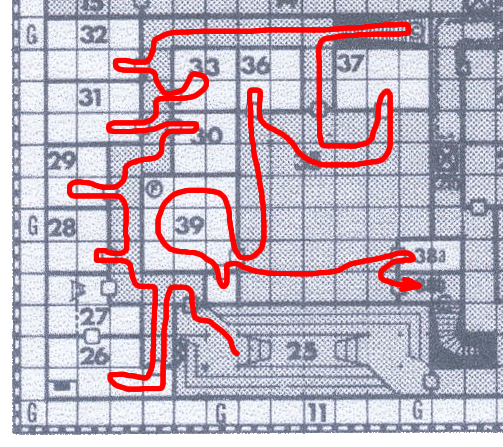 The Heroes 4 Hire finished their short rest in the eerie room of slaves, checked their conditioned but decided to leave them there until they had finished clearing the stone keep and any dungeons below. The team continued on past the room, into a hallway with several branches and lined with doors. They began systematically checking each door chamber by chamber, first coming upon a half-orc smith solemnly working his forge. They approached him and asked about the fort and its defenders, and he informed them what little he knew of them and then turned back to his work. Not seeing the elderly half-orc as a threat, they left him to his labors and continued clearing rooms, leaving the next room… the smith’s family’s room… alone as the smith had requested.

They found several sets of barracks, all empty of the soldiers who had rushed out to defend the fort against the Heroes onslaught. They eventually came upon a older, gray-bearded man dressed in merchant’s garb, sitting at a writing desk in a comfortable guest quarters. He asked the party what he could do for them, and they inquired to his identity and if he was associated with the slaving network. Puzzled by the question, he identified himself as a slave merchant and, suspecting the team was not part of the mercenaries in the employ of the fort he originally took them for, asked the group who they were. The Heroes identified themselves and told the merchant they would place him under arrest if he didn’t resist. The merchant retreated towards the corner, drew a longsword from under his robes to defend himself, yelled for his bodyguards, and the fight was on.

Greves went to bar the door as Lt. Diplo Norixius attempted to leg-tackle the merchant, which he deftly avoided with some quick footwork and a sideways shinny. Dajjal and Alton Beeblebrox opened up on him, knocking him unconscious so Illyia Baham could manacle him to the desk. Meanwhile, the merchant’s two bodyguards forced the door open and then retreated into the hallway as the team focused their attention on them. The bodyguards were strange… mutated aberrations of former humanoids… gaunt torsos and extremities, bulbous eyes, misshapen heads, clawed, padded hands and feet, and a tail… one prehensile and one with a stinger. Heroes 4 Hire stormed into the hallway to engage the creatures, but found them disappeared. A short search discovered them spider-climbing on the ceiling, as they pounced down into the party. The Heroes were unimpressed, and killed them with little adieu.

The party continued down the hallway, checking doors and chambers as they went. They found several more empty barracks, a few empty officer’s quarters and a store room, before they came upon the door to the servant’s quarters with the sounds of a raucous brawl, laughter and cheering coming from the other side. A peek under the door with a mirror revealed goblins and kobolds gathered around furniture and beds tipped over into a makeshift fighting ring, excitedly watching some contest going on within. The team prepared, breached the door quickly achieving complete surprise on the group, and found inside the ring a pissed-off badger and a distressed male halfling brandishing a broken table leg in defense. Diplo harpooned the badger dead from across the room and the team laid into the startled goblins and kobolds, killing them all before they could react.

The rescued halfling thanked to the Heroes 4 Hire, but declined their offer to bring him with them. Having told him of the locations of the traps on the way out of the keep and the demise of the forts inhabitants, Malaric Wanderfoot opted to work his way out of the fort and on to freedom. Illyia summoned Nightshade and instructed her to show Mr. Wanderfoot the way out, and then told him where to find Kwon and the observation post, where he could wait in safety until the team was finished and could escort them all back to Highport and out of Morytania. With that, Malaric scavenged a weapon and some leather armor from the goblin corpses and departed with Nightshade for the exit.

The team resumed following the corridor until they came to the massive kitchen, looking for a pantry hiding a concealed door leading down. They searched through several doors leading off the kitchen, and discovered the fort commander’s quarters, and within it, a closet with a large iron padlock securing it. As Illyia began to pick the lock, a female voice yelled through the door, “Icar, you snake’s belly, release me!!” After a short conversation they opened the door to release her, and were surprised (sort of) to find a medusa. To return the favor, she immediately turned Illyia and Beeblebrox to stone, but Dajjal stopped her cold with a Hold Person spell. The remaining un-stoned team the proceeded to chop her up into little bits, with Greves taking her head clean off.

Karraway took the bottle of Rockstop and applied two of the remaining three doses to recover Illyia and Beeblebrox from their petrified state. The room was searched and the commander’s… sizeable… treasure was recovered. Back in the kitchen, the larder and the pantry were found and searched, and the aforementioned concealed door was uncovered, leading to the dungeons.

What other surprises does the keep have in store? Who is running the show? What will the Heroes find in the dungeons beneath the keep??

Secret of the Slavers' Stockade: Storming the Keep "Think it'll work?" "It would take a miracle."