Secret of the Slavers' Stockade: Knee Deep in the Shit 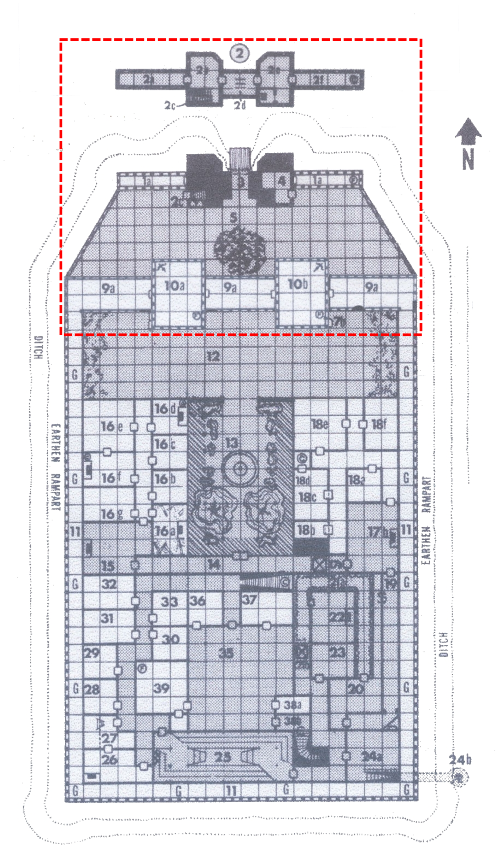 Pinned under a surly hobgoblin soldier, Illyia Baham activated his Ring of Misty Step once more and teleported a short distance to the other side of the tower top. Another soldier pursued him with a longsword, but Illyia managed to dodge his attacks and rush over to Alton Beeblebrox, still manacled, beaten and unconscious. He scooped up his compatriot, dashed across the breadth of the tower and jumped off the edge between the battlements… landing safely atop the center wall parapet 15’ below. Lt. Diplo Norixius and Greves were still engaging the soldiers through the doorway of the eastern tower third floor, and Illyia dashed with the unconscious Beeblebrox back into the third floor chamber of the western tower. Diplo and Greves attempted a fighting withdrawal, but Diplo was critically hit multiple times by archers as they crossed the short distance between towers and fell to their arrows. Greves doubled back to Diplo, forced a Potion of Greater Healing down his gullet and brought him back from the brink of a terrible fate. The two then dodged the remaining incoming missiles and made it back to the safety of the western tower’s third floor.

Greves immediately climbed the ladder to the top of the tower and began reloading the ballista emplacement. Illyia noticed that the back door into the chamber, coming from the outer wall parapet, had been unbarricaded and unbarred, as well as half the crates and barrels stacked atop the table over the floor trapdoor hole had been removed. He warned Diplo that he thought there might be an invisible intruder in the room, and then took a defensive position in a corner to attempt to revive the unconscious Beeblebrox. The party re-secured the room, Beeblebrox regained consciousness, and the barricades were reestablished. As Dajjal crossed the outer courtyard toward the rope to rejoin them, the team then took to sniping at the archers mounted along the walls. 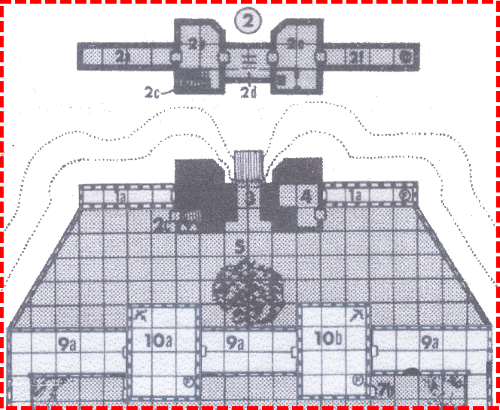 The Heroes 4 Hire started looking around the room for the supposed intruder, and found one. Hiding in the shadows near the high ceiling they spotted a Boggle: a small humanoid with dark bluish-gray skin, large eyes and bulbous, misshapen features. Finding itself discovered, the boggle instantaneously teleported away, leaving the party baffling at what they just saw. Suddenly, the boggle’s arm clawed a near-miss at Illyia from a nearby arrow slit, and then in an instant from another on the adjacent wall. Nightshade spotted the boggle on the exterior of the tower, spider-climbing the wall and reaching in the arrow slits from an opposite corner. Illyia remotely fired a Magic Missile barrage at the boggle through Nightshade, striking it three times and sending it off in another frantic teleportation. The boggle’s teleport brought it just inside the room again, clinging to the wall over the back door, and it immediately Dimension Door’ed again out of the room before the party could shoot it. Nightshade continued circling the tower, and saw the boggle appear from the short range teleport on the exterior of the tower, again, on the opposite side from the last attack. Again, Illyia used Nightshade to deliver a barrage of Magic Missiles, this time fatally.

Diplo took a moment to heal up with another potion, and then noticed the soldiers in the opposite tower had ejected the flaming crate from the room and then slammed shut the door facing the west tower across the center wall parapet. Atop the west tower, Greves observed the four hobgoblin soldiers atop the east tower begin reloading the ballista. He stopped fiddling with his ballista and engaged them with his heavy crossbow, felling two before they could get to cover behind the battlements. Greves and the remaining soldiers shot it out, crossbow versus longbows, across the 40’ gap between tower tops, until Greves’ superior marksmanship won the night.

The team observed the squad of troops rounding the backside of the stockade perimeter wall, and decided they had to do something or they were going to get pinched between two squads in this very room. Diplo gulped down his Potion of Speed, borrowed the portable ram, dashed across the center wall parapet and began battering the east tower’s door. Two blows with the ram and the large dragonborn paladin splintered the door clean off its hinges, barely giving the hobgoblins inside time to organize into a defensive line from their previously offensive preparations. Moving at double speed, Diplo waded into the third floor room of the eastern tower with harpoon flying and warhammer swinging. The remainder of the team in the western tower continued sniping from arrow slits at the archers along the perimeter wall as well as the squad circling to assault the western tower from the back door. Having cleaned off the top of the eastern tower with crossbow shots, Greves moved to the opposite side of the western tower top to also engage in shooting the approaching assault force.

Amazingly, Diplo singlehandedly wiped out the entire remainder of the squad in the eastern tower while the other squad of soldiers finally made it to the back door. Diplo sprinted back to the west tower as the hobgoblins began battering the back door with a portable ram. The party rained arrows in from both sides and above. Beeblebrox leaped from the southern arrow slit to the western wall parapet, landing beside the two soldiers working the ram. Several soldiers moved to engage him as he started swinging. The team picked off one after another, and when they had disabled the troopers working the ram, Diplo opened the door they had been beating on and attacked them directly. Timing was against Lt. Norixius, however, for as he attacked the remaining hobgoblins the effects of the Potion of Speed ended, and a debilitating wave of lethargy swept over him.

Luckily, most of the squad of troopers had already been decimated before the methamphetamines in Diplo’s system wore off. That, coupled with sharpshooting teammates and a halfling Cuisinart kicking all the ass he can find, kept Diplo’s sudden onset of uselessness from being fatal. By the time he recovered, the soldiers were destroyed, and their third floor room in the western tower appeared to be safe for the time being. 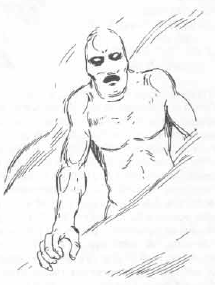 On the second floor of the curtain wall, Karraway continued to try to shake off the apparition’s loving caresses. His attempt to turn the ghostly entity failed, he dashed past to the ladder rising to a ceiling trapdoor leading to the parapets above, only to find it barred from the other side. He then failed another attempt to turn the entity, and with his dexterity almost gone he sprinted back through the door into the eastern curtain wall watchtower chamber beyond. The apparition simply floated along with him the entire time, still lightly laying its hand on his shoulder.

Dajjal was equally astonished at the situation. Having extensively studied the undead, he originally surmised that this was a Ghost in the most classical sense, but as he witnessed the events unfold around him he was baffled. This ‘ghost’ didn’t behave as ghosts do… it would not turn, it didn’t seem malevolent, and it wasn’t physically damaging Karraway. In fact, it appeared as if the entity wasn’t even aware its touch was having a detrimental effect on Karraway. As Karraway sprinted by him into the other room with the apparition in tow, Dajjal attempted one more round of Eldritch Blast and crossbow shots to no avail, and then decided he couldn’t help the situation without the rest of the team. He ran over to an arrow slit, jumped down to the outer courtyard below, and dashed across to the rope hanging out of the third story arrow slit in the west guardhouse tower… where the other two-thirds of the party had been embattled for the last several minutes.

As he passed the morass of mud, the ankheg made another surprise attack with its snapping mandibles, but missed Dajjal and spit acid at him as he leaped up the wall and started climbing the rope. The archers atop the curtain wall were still alert for the ankheg, and ignored Dajjal in order to shoot the giant centipede-like burrower. Three hard hits were scored, and the ankheg retreated beneath the earth again, severely wounded. Dajjal scampered up the rope and in the arrow slit on the third floor of the western guardhouse tower to join his friends there.

With the party’s health frighteningly low, will the third floor of the western guardhouse tower prove safe enough to allow the Heroes 4 Hire to rest? What is the mysterious entity in the curtain wall’s second floor, and what fate has befallen the abandoned Karraway? What will they do next?

Secret of the Slavers' Stockade: Good Gone Bad Why are we stopping?

Secret of the Slavers' Stockade: Cracking the Nut (Not So) Modern Warfare 6