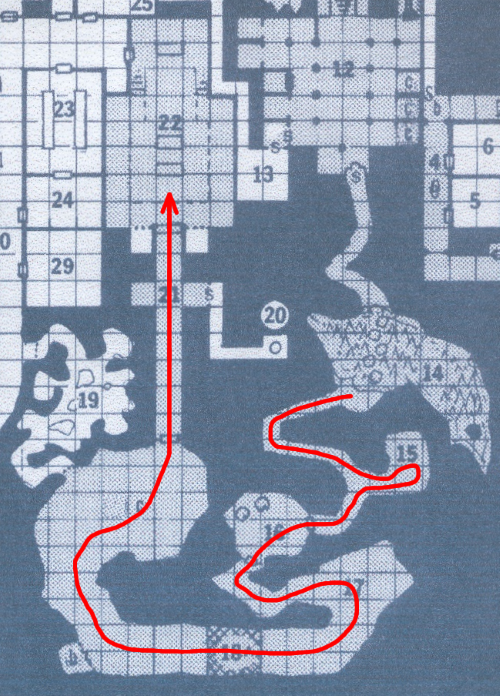 Having successfully navigated past the steam-filled cavern, the Heroes 4 Hire continued to work their way down the natural limestone tunnels, passing through a complex of chambers used for cheese curing, beehives and the beekeeper’s storage, before turning a corner into a larger, rough-hewn stone passageway nearly twenty feet wide. The party spread out to four-abreast and proceeded; however, Illyia Baham spotted a net trap set mid-span the length of the hallway and stopped the group short. He began to investigate, but the net suddenly dropped, and he was forced to tuck and roll back out of the way to avoid being caught.

An elite goblin leader stepped out from a concealed alcove at the opposite end of the great hall armed with a halberd, obviously having operated the trap. The hall at his end bent around a corner, and he was shouting orders in Goblin to cohorts beyond. Nine goblin elites, mounted on worgs, rounded the corner in three ranks three abreast. The first two ranks charged the Heroes with light lances, while the third rank remained in reserve by the leader to harass the party with their shortbows. The front rank blew through the party, dealing some damage but also losing two of the riders to the group’s weapons as they passed. The second rank charged and then remained on the front side of the party, while the worgs and one remaining rider from the first rank turned and engaged the party from behind, effectively pinning them into a squeeze play.

A short but brutal fight ensued, as the large worgs tore at the Heroes and the Heroes fought back. The party turned themselves to fight back-to-back, three-and-three, with Lt. Diplo Norixius, Greves and Illyia Baham engaging the second rank of worg-riders to their front, and Karraway, Dajjal and Alton Beeblebrox taking on the decimated first rank at their rear. The first rank, behind the party, was the first to be dispatched, and while Karraway joined the other three engaging the rank at their front, Dajjal and Illyia switched to magic and ranged weapons to return fire to the reserve element peppering them with arrows. The two of them focused fire on the leader with the halberd and dropped him before he ever entered the fight in earnest. With that, the third rank then committed itself to the milieu and closed with the party, and the Heroes 4 Hire killed them all.

The group quickly searched the leader only for keys, finding a small ring with just a few, and left the rest of the searching for later. They rounded the corner into a huge natural chamber set up as barracks for the riders, and off it a gated den for the worgs themselves. A finished stone hallway departed the chamber to the north, and the party followed until it ended in a grand set of double doors made of iron-banded oak. They listened and heard the sounds of people going about their business, and Illyia peeked under the doors with his small mirror to see several sets of feet going, again, about their business. The Heroes stacked up on the doors in preparation to breach, hoping to surprise the occupants on the other side. 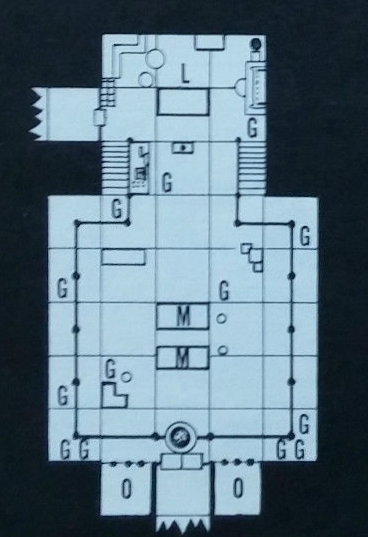 The party burst through the doors into a frightening stone chamber, a laboratory of mad experimentation in the modification, mutation and hybridization of people and animals, complete with a pair of recent works still chained to the stone slabs used as operating tables, and a squad of elite goblins waiting to ambush the adventurers. On the opposite end of the darkened laboratory, in a section laid out as a workshop of alchemy workbenches and herblorist equipment, they saw movement like something or someone ducking out of sight. The main section of the lab was rung by a 5-foot wide catwalk balcony a story above, where half the goblin squad was stationed with their shortbows ready. Two of the goblins on the balcony above dumped a cauldron full of briny water and severed parts of people down on the party, covering them and dousing any torches and lanterns they had.

The Heroes 4 Hire dove into the goblins in full force; those that did not have Darkvision capabilities took a moment to relight torches. The goblins above peppered them with arrows; the goblins below attacked them with morning stars. Several goblins fell in the opening round of combat, but then the two that had dumped the cauldron pulled levers, two metal gates slid open, and from a pair alcoves flanking the doorway behind the party two angry Owlbears charged out at the unsuspecting adventurers. Illyia fired his blinding poison darts at each of them, successfully blinding one but missing the other. While the rest of the team went to work on the blinded owlbear, Illyia retreated back through the door and into the approaching hallway to avoid the melee, but the unblinded owlbear took offense at his attack and followed him into the hall.

The blinded owlbear fell quickly to the party’s attacks while the unblinded owlbear mauled Illyia to death. Diplo and Dajjal switched targets from the dead owlbear to the live one, and came to Illyia’s aid almost too late. Diplo attack the owlbear to keep him busy, and Dajjal managed to slip by fast enough to cast Spare the Dying on Illyia’s unconscious corpse, stabilizing him. He then rejoined Diplo in attacking the remaining owlbear, which Diplo was slowly drawing back through the doorway into the room where Beeblebrox joined in. Greves was upstairs on the balcony and Karraway was across the room, both mopping up the last of the goblins, when the second owlbear fell.

A small dart of red light came flying from the back of the darkened workshop area toward the melee that just concluded inside the threshold of the double door, disappeared a moment when it had reached its destination, and then thunderously erupted into a giant Fireball. Illyia’s unconscious corpse was immediately un-spared from dying, Greves and Diplo were blown from their feet, knocked unconscious and dying, Beeblebrox was cooked-but-still-standing and Dajjal just stood there enjoying the warmth. Karraway was across the room well clear of the detonation, but immediately cast a Healing Word to bring Greves back to consciousness from the brink of death. Beeblebrox force-fed a Potion of Greater Healing down Diplo’s throat to save him from death, and then Diplo used a small Lay on Hands to revive Illyia.

Unbeknownst to the party, the agent of the Slave Lords responsible for running the slaving operation here inside the protective walls of the former Fort Garsley, a silver-skinned female Moon Elf named Markessa, having cast her Fireball from hiding, recast her spell of Invisibility unseen while the Heroes were scrambling to recover everyone from the clutches of death. She then began a cat-and-mouse game of circling around the room stealthily to find more hidden vantage points from which to shoot spells from, peppering Beeblebrox, Karraway and Dajjal with Fire Bolts and then immediately recasting Invisibility before anyone saw from where she fired. With nothing but first level spell slots remaining, she elected to remain invisible and hide until the party left.

Sensing the change in tactic, the Heroes 4 Hire secured the exits, both the double doors in the front of the chamber and the single door off the side of the workshop in the back, and proceeded to wait out the still unrevealed agent, Markessa. Some of the party searched while they waited, and discovered the room full of valuable alchemical and herblore equipment and ingredients, if one could find a wagon to carry the bulky goods back for resale. They also found a set of parchments, one of which listed names of slave merchants with which Markessa regularly did business, an inventory of slaves and their general descriptions, and a map of the main caravan routes around the region including a single route to an unheard-of city farther into the interior of Morytania, named Suderham, with a scrawled notation next to it simply reading, “Lords”.

Expecting the invisibility to wear off soon, they waited nearly twenty minutes before they decided the ‘mad scientist’ had somehow given them the slip. Giving up the standoff, they opened the single door at the back of the workshop, and proceeded into the hallway beyond.

Will the Heroes ever discover the still unrevealed Markessa, Agent of the Slave Lords? With their physical and spiritual resources dwindling after hours of grueling, non-stop combat, how much farther into the dungeons under the stockade can their luck hold out? What other surprises will they discover?

We definitely want to find her but some in the party think we are done here and leaving one alive can do no harm. I think if we did all this trouble to get in we have to clear everyone out. Except the blacksmith, the blacksmith is fine….

Secret of the Slaver's Stockade: Markessa's Demise "This is going to take forever to loot."

Secret of the Slavers' Stockade: Markessa, Round Two "I really hate this bitch."