This is the story of a world far away, a world of magic and legend, where the pantheon of the Sovereign Host hold the universe in delicate balance against the petty cruelty of the Dark Eight. It is a world where the nations of the Free Peoples, those communities of humans, elves, dwarves, halflings and the like, constantly battle for civilization against the onslaught of the Inhuman Hordes, marauding bands of the denizens of evil.

Our story begins in the tiny hamlet of Hellespont, little more than a ‘truck stop’ along The White River, which boasts The River Bend Inn, an exceptionally large inn and tavern to match, that easily handles the large amount of river barge traffic that stops to layover each night. It begins with seven strangers in that tavern, who answer a poster simply saying, “Adventurers Wanted: Inquire with Thorbald at the Jailhouse.” They are:

Alton Beeblebrox — A stout halfling monk disgraced from his monastic order and left to hedonistically wander the world, like Cain in Kung Fu;

Dajjal — A tiefling warlock with ties to a dark and sinister power, whose secretive ends are jealously guarded;

Krinae Nilok — An elven rogue who abdicated his noble birthright to walk in the shadows;

Shazana Keteeryn — A drow ranger who turned her back on Lolth and the Underdark to walk in the light;

Ryoun Rodri — A human sailor turned sellsword with a talent for magic;

Calyx Siannodel — A half-elven paladin raised and trained in the Temple of Belenus, now seeking righteous vengeance against those who commit evil.

These seven strangers first met when they each arrived at the jailhouse, met Sheriff Thorbald and heard the proposal from the village’s elder council they had authorized him to commission. Some twenty years prior, farms around Hellespont were vandalized and pilfered by evil goblinoids resident in a ravine full of caves approximately ten miles north of the township. Another adventuring party was commissioned back then to go clear out the caves with extreme prejudice. The other party made several successful expeditions to the ravine, and the problem was solved. However, now two decades later, the problems had returned, and the thefts of livestock and farm produce had escalated to kidnapping.

Three farmers — a husband and wife named Finn and Anara, and an older widower named Paul Eddard — were missing from their ransacked farmhouses. Evidence indicated they had been drug off in the night toward the ravine, and the elder council decided it was time to act. The strangers introduced themselves to each other, took the offer, and over drinks that afternoon in the tavern they formed an adventuring company named Heroes 4 Hire.

The next day, the newly formed Heroes 4 Hire gathered their equipment and purchased some last minute supplies, and then headed up to the ravine north of town to begin investigating. They walked up the main road toward Southpaw, and eventually came to the trail head to the ravine described by Thorbald. The trail led them to the rocky ravine, speckled with stands of bramble-ensnared trees and bushes, and they observed several cave mouths dispersed irregularly around the slopes at varying heights. The party deliberated for a moment, then decided on the lowest, closest cave entrance to their left. 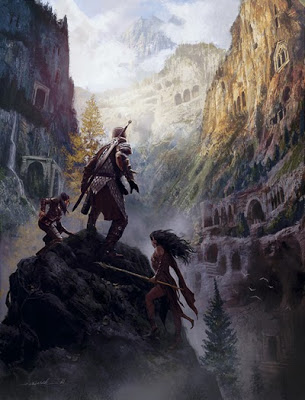 Nilok and Shazana scouted inside together while the rest of the group waited just outside the entrance. A series of rough-hewn tunnels presented themselves, a five-way intersection but no noise to telltale what was resident in the cave complex. Shazana went to tell the others what they found, while Nilok scouted farther down the southeastern tunnel, and observed a chamber with several goblin-sized pieces of furniture, complete with a set of goblins as well. While he was watching them unobserved, the rest of the team entered up to the intersection, and while quietly discussing their next move, a four-goblin patrol came by and started the fight.

The team quickly dispatched the patrol, but the sounds of combat roused more goblins from two directions, and the team would have been quickly pinched had it not been for a timely deployment of a bag of ball bearings by Nilok, effectively taking one group of goblins out of the fight temporarily. They engaged one group, killing several and sending the rest fleeing, when the second group approached finally and brought with them an Ogre. The team took a few hits from the goblins, but managed to avoid the tree trunk the ogre was swinging. After that engagement, they interrogated a goblin they had managed to capture, gaining a bit of useful information about the layout of the cave system. They explored one direction until coming to a door, barred from the other side, and then decided to explore a different direction which brought them to the main living chamber of the goblin tribe.

They managed to approached the chamber unnoticed, and opened up a surprise attack into the tribe’s main body. Four young goblins managed to flee the onslaught down a darkened hallway deeper into the cave complex, and after the party had cleared the rest of that room, they decided it was time to call it a day, based on their dwindling supplies and the amount of damage they had sustained so far. They searched and looted, then packed up their findings for the day and traipsed the miles back to Hellespont for the night. Once safely back in the River Bend Inn, they spent the night drinking, getting to know each other better, discussing what had went well and ways they could improve their teamwork, and eventually went to bed.

All in all, a successful first outing to the Caves of Chaos!

How will the new team fare as they learn each others’ strengths and weaknesses? Will they be able to mesh as a cohesive unit as they face new and tougher challenges? Will they succeed in finding the missing farmers and neutralizing this new threat to the riverside hamlet?