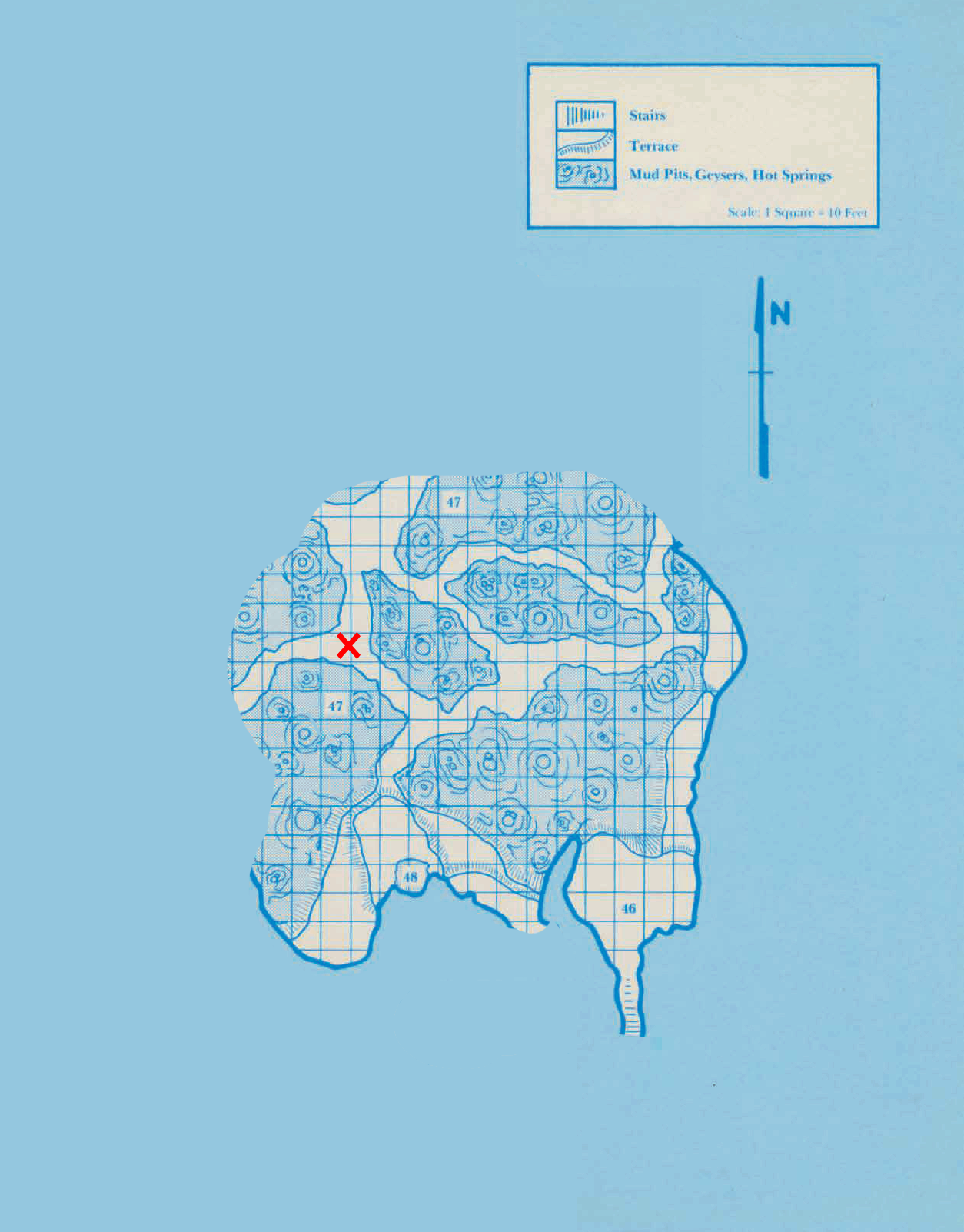 The Heroes 4 Hire finished surveying the giant cavern from their limestone perch, and descended the series of natural mineral shelves running north along the east wall until they found a set of crusted footpaths winding their way between the bubbling mud pits out into the darkness enveloping the central cavern. There they anchored pitons and ropes, and lowered themselves down from the last shelf to the paths. Everything in this cavern was covered with trickling water from the constant steam and heat of the geothermal surrounds. The steam was on the edge of blistering, and it obscured vision beyond fifty feet at most, often even less. They carefully picked their way along the path, careful not to slip on the slick limestone crusts, until at a junction somewhere near the middle of the cavern they turned south.

They traveled south for a short distance before finding themselves faced with a cliff wall buttressing another set of limestone shelves extending out of sight above their heads. Illyia Baham pulled a siege ladder from his Bag of Holding, and the party ascended the forty feet to surmount the ledge. There they found a pool of boiling water nearly twenty-five feet across, in the back of the shelf against the southern wall… one of many sources of the steam filling this great cavern. Still wearing the suit of alien armor, Karraway suggested he dive the pool to investigate it, protected by the suit. He found that after nearly twenty feet down, the natural shaft of the boiling well bent in a nearly perfect U-shape, proceeding back into the rock nearly another twenty feet from where is ascended to the shelf where they had found it. The far side of the bend again ascended vertically until Karraway surfaced, but this shaft continued vertically well out of his sight into the steam above. For some reason, he got the feeling that vertical shaft ended at the hole in the hallway floor they had found on the level above in the ruins of the temple. He reversed direction, returned to his compatriots at the mouth of the boiling well and reported his findings. 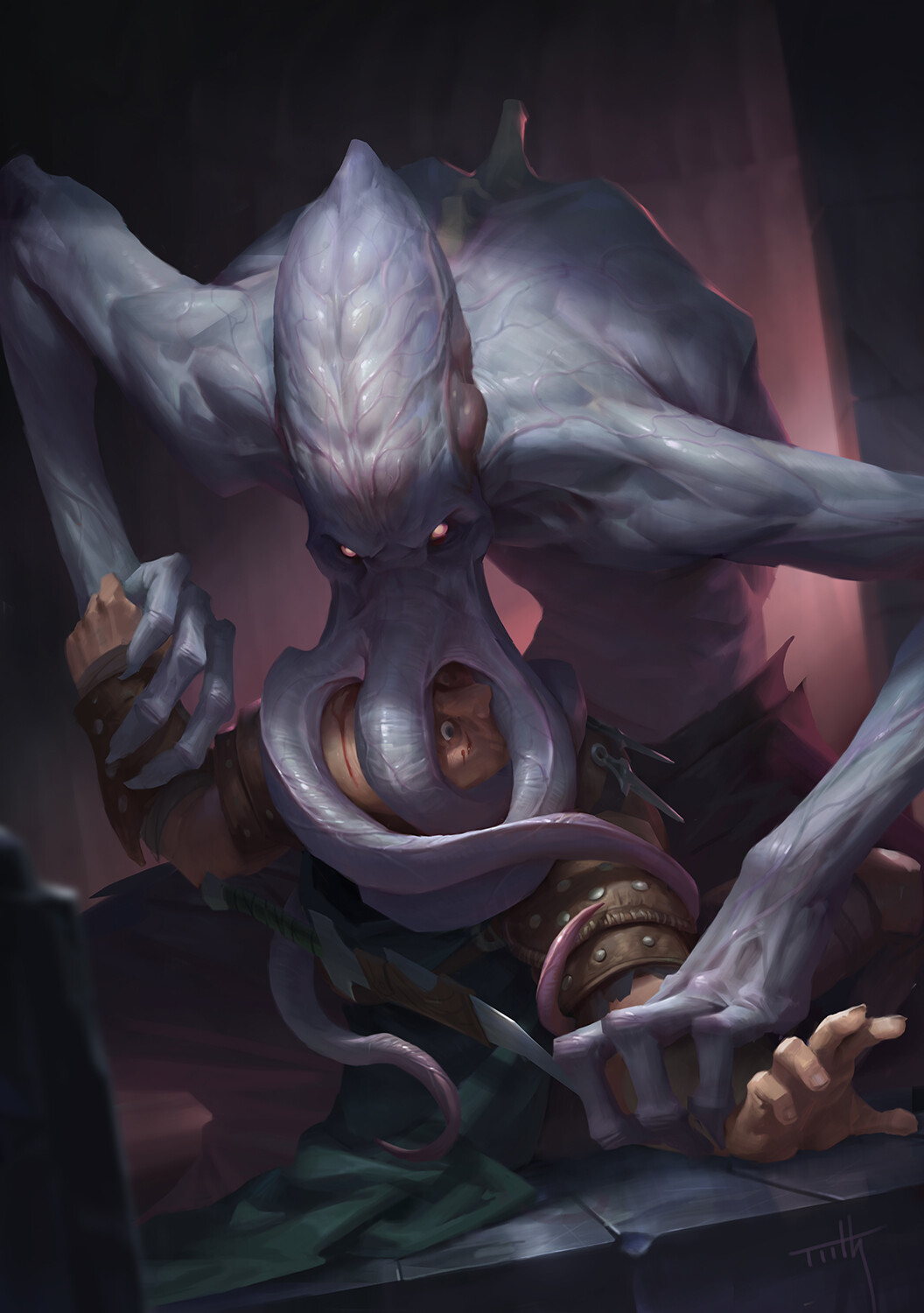 The party returned to their ladder and descended back to the mineral-encrusted pathways on which they had approached the southern ledges. They moved quickly back north to the central junction, and then departed that junction to the west. A few yards later, they entered into another multi-way intersection through the steaming geothermal fog. Smedley “Deadly” Hampton noticed corpses floating in the mud pits to the northeast of the intersection. As he called this to the attention of his partners, ten aberrations sprang from the mud pits to the north- and southwest of the party and to the party’s near-total surprise. The Cephalomorph Abominations stood nearly eight feet tall, with grayish-tan skin and a tentacled maw. The ten monsters descended on the adventurers with a vengeance and a raucous brawl ensued, during which two grappled Lieutenant Diplo Norixius and one grappled Karraway. Their companions knocked several down in an attempt to rescue them, but with a sickening crunch the grappling Abominations bore through their skulls and feasted on the brains within. Moments later, the Abominations lay destroyed, but it was too late to save the cleric and the paladin.

The team chose to end their exploration of the caverns beneath Taboo Island there, pack up the bodies, the equipment and the loot… including one of the Cephalomorph Abomination’s corpse… and return to the mainland for Resurrections and additional training. With the help of a Tenser’s Floating Disc they managed to heave all the luggage back to the surface, where a Cap of Water Breathing and a Ring of Swimming returned two of the party to Mantru Village where they requisited several outriggers to come pick up the entourage. They told the Talking Chief, Fano, of their discoveries on Taboo Island and warned him to continue keeping his villagers away until they could return and finish what the had started. They prepped the bodies and items for long term travel, and then headed out over the rim of the caldera that hides the villager and the lake and headed south over the plateau to the rope bridge that brought them there. Once across, two more days of travel brought them down the mountain range and along the frontal foothills to the coast, where the Sea Wyvern was faithfully awaiting their rendezvous. Another four days of sailing, and they arrived back in Anchorhead and familiar grounds.

The Sea Wyvern arrived into the Harbor District late into the evening, and the Heroes saw to the unloading of the trade goods, equipment, supplies and most notably, the corpses of their two fallen comrades. They went to the Falconer’s Spire as soon as disposition of the bodies and goods and monies were attended to, and pounded on door of the darkened shop endlessly until a blurry eyed and irritated Master Kozar Ven answered the door angrily. They showed him everything they had brought back to the mainland, reported the revenue generated with the trade with the Tanaroans, and left the two constructs complete with their docking apparatus with him after negotiating a 5% royalty for any future profits from their study and reverse engineering. They then packed up their wagon with the corpses of their dead and their loot, mounted their horses and rode the day’s journey northward to Half Point.

The Heroes 4 Hire arrived at Half Point early in the evening, where they were happily met by their Steward, Alyn Quinn, and their Guildmaster, Mahim ‘Mayhem’ Dwalin. The bodies were lain in state, the equipment and spoils unloaded, and once the mounts were stabled the Heroes returned to their comfortable rooms for a long rest after a long and trying journey. They arose the next morning to a day of tending their businesses at Half Point and elsewhere, as well as their other ventures and interests, spending most of the day with their steward, guildmaster and staff. Two points of major concern came to light: first, no contact from the Hardby Mine had been received in months, as well as no contact from the investigator they had sent, and secondly, no word had been received from Naïlo Thia since they last saw her in Anchorhead before she departed for her ancestral home in Atryae with her father and Erendriel Thalolan.

The next few days saw the Heroes 4 Hire taking some much needed downtime replete with recreation and activity. Smedley held an impromptu archery competition among the guild membership, Illyia spent his time romancing the beautiful Alyn Quinn, and Alton Beeblebrox led five accompanying guild members on a trek south to New Haven and the Temple of the Crashing Wave, with a stop in Anchorhead as they passed. Smedley and Alarith Degries accompanied them to Anchorhead, where Alton picked up his Winged Boots and Do-Rag of Insight from the Falconer’s Spire while the other two ran errands in town before returning to Half Point. Upon their return, Father Tristan also arrived at Half Point and rented a room at the Blind Boggle Inn… to discuss and possibly perform a resurrection.

Will the Heroes 4 Hire resurrect their fallen comrades? Will they return to the mysterious Dread Isle, or follow another pursuit? What new adventures await?

The Dread Isle: Descent into the Depths Fears just beneath the surface