Fears just beneath the surface

The Heroes 4 Hire investigated the steam vent in the middle of the hallway, but with the shaft billowing scalding steam so thick it prevented vision past a few feet, they decided to shimmy past it and continue their exploration down the hall beyond. Past the vent, the hall turned south and proceeded out of sight, and as they moved south the steam filling the passage lessened and thinned, until they arrive at an archway closed by another portcullis, rusted into its frame by years of exposure to the steam. Past it lay a 30′×30′ room, with similarly steam-moistened walls, lined on the east, south and west by deteriorated, grimy statues… some of female humans holding children, and other of fierce, demonic monsters. A rotted trapdoor was visible in the ceiling, and occasional puffs of dust drifted through its cracks. The team made several varied attempts to open the portcullis, to no avail. 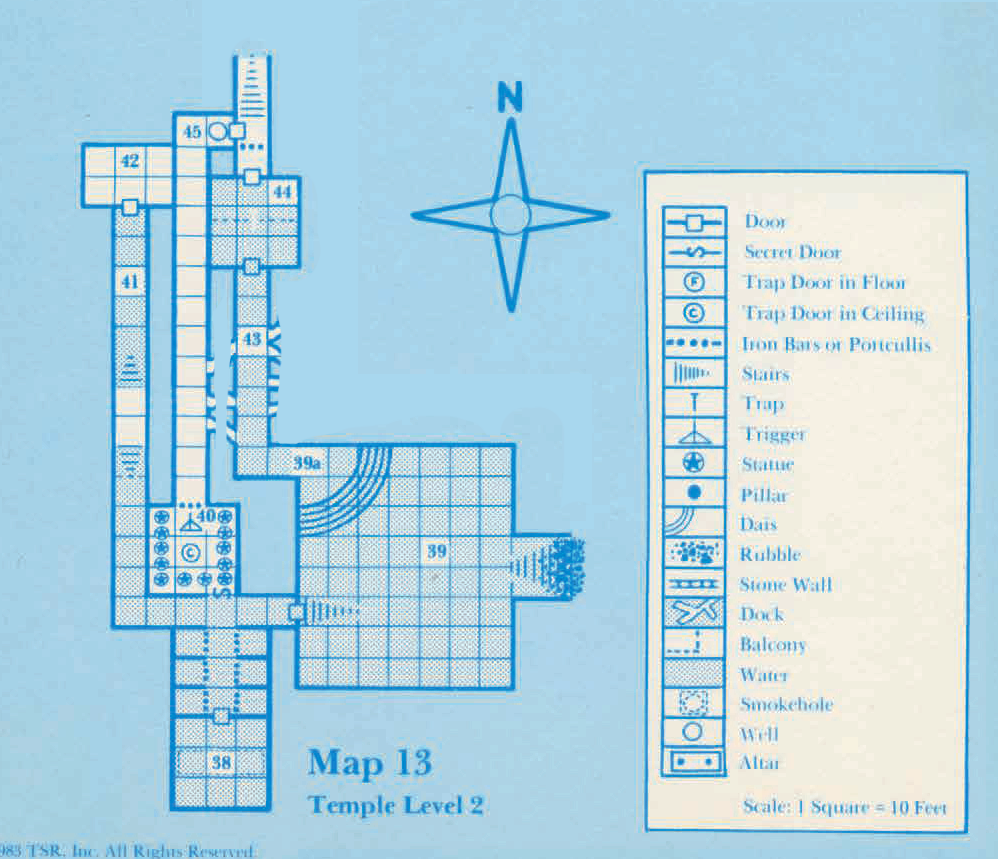 Illyia Baham used a Dimension Door to teleport to the other side of the portcullis, and investigated the walls for any traps, triggers, secret doors or ways to open the portcullis. While searching the wall behind the statues, two of the demonic looking statues moved to attack him. Illyia dodged most of the attacks, only taking minor damage from one successful claw, but the rest of the Heroes opened up on the gargoyles with ranged attacks through the portcullis. The gargoyles were vanquished almost immediately. Illyia resumed his search, finding a secret door behind the statues in the southeastern corner of the room… it’s location betrayed by several puddles of water that had leaked into the room from beyond. He opened the door which swung into the room, stepped out and realized he was in the hallway across the huge water-filled chamber which they had entered this level, and then told his companions to circle back around and join him.

The team did just that, circling back around the way they had came, swam across the large chamber to the other passageway in the west wall, and climbed out of the water into the now-emptied hallway where Illyia now stood. The passage continued west a ways before turning north, but across the hall from the secret door an archway in the south wall opened into a block of cells… rusted and crusted from eons of immersion in the steaming water. The cells were otherwise empty, and the door in the southern wall of the cell block opened into an obvious torture chamber, also rusted and deteriorated into oblivion after centuries of submersion. They returned to and followed the previous passage west until it turned north, and after sixty feet the hall climbed a set of stairs, and then after another twenty feet then descended again, but back into dark, murky, scalding water.

Alton Beeblebrox, still in his aquatically altered state, drove into the water without hesitation, and five lacedons immediately surrounded him, clawing and biting and attempting to drag him to the bottom to drown him. Their claws wounded him seriously, but the paralyzing effect of the clawing attacks by these aquatic ghasts froze him stiff, and they moved in to feed. The rest of the party attacked in an instant, Smedley “Deadly” Hampton raining arrows in with deadly accuracy killing two. Rumblebelly roared an intimidating challenge from the water’s edge, but the lacedons appeared to be unaffected. Karraway cast Spiritual Weapon and then joined his own spell in hammering another lacedon to death.

The remaining lacedons tried to drag their paralyzed meal north away from the dry stairs, and their continuing feeding drove Alton into the brink of death. Lt. Diplo Norixius used Turn the Unholy against these undead, and one broke off its assault and fled northward up the passage until it was stopped at a closed door. Alarith Degries fired shots to finish off the fleeing lacedon, and the rest of the party waded into kill the last one and rescue Alton from a watery grave. Diplo then used Lay On Hands to stop Alton’s death spasms, and Smedley force fed him a Potion of Healing.

The team then continued to the northern end of the hallway and its swollen, oaken door. They attempted to bash it open using their portable ram, but it would not budge. Again, Illyia used a Knock spell to blast it open. The room beyond was 30′×20′, wide by long, and dry. Again, a rush of water emptied a large portion of the flooded hall into the room, however, the Heroes all managed to keep their feet. The room used to be a priest’s chamber, judging by the appointments, with a small altar against the norther wall opposite the door, and several stone benches arranged in front of it. Hanging from a stone hook on the wall was a bone-handled mace, which Illyia detected a magical aura around. He used Identify, and found the mace to be magical, and named the “Mace of Genuflection”. The party took to a thorough search of the room, discovering a well hidden compartment (now below water) in the altar’s base, containing 500 gold pieces and two coral statues that vague resembled these ‘Illithid’ the aliens had apparently turned into. 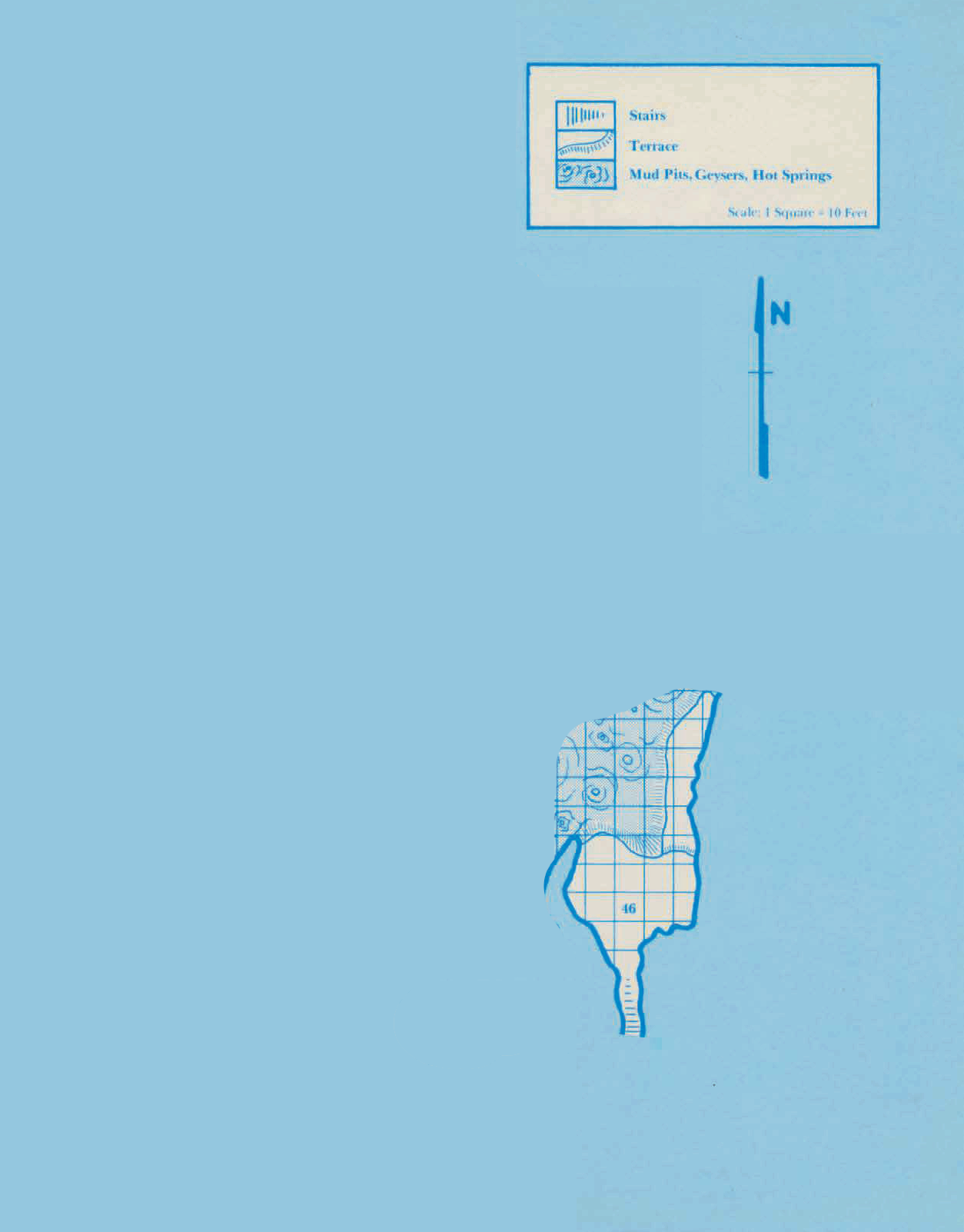 Finding no other exit from the room, the Heroes returned past the steam vent and headed down the stairs descending from the northern most passage. The stairs eventually gave way back into natural passageways and caverns, descending and twisting around until they were all fairly well disoriented. Down, down and more down they went, over what must have been miles, until finally the cave-passage opened up into a massive underground natural cavern that extended well out of sight ahead of them. They were perched high atop a natural limestone shelf where the passageway had deposited them, overseeing the cavern below to the extent of their vision, which was filled with mud pits, paint pots, geysers and other geothermal activities. They could see pathways worn between the pits and other features, and to their right they could see other rock-shelfs they were confident they could climb down, should they decide to proceed.

How far below Taboo Island will the Heroes 4 Hire explore in order to meet their contract requirements? What will they do if they encounter these ‘Illithid’? What new adventure awaits?