“Two possibilities exist: either we are alone in the Universe or we are not. Both are equally terrifying.” — Arthur C. Clarke 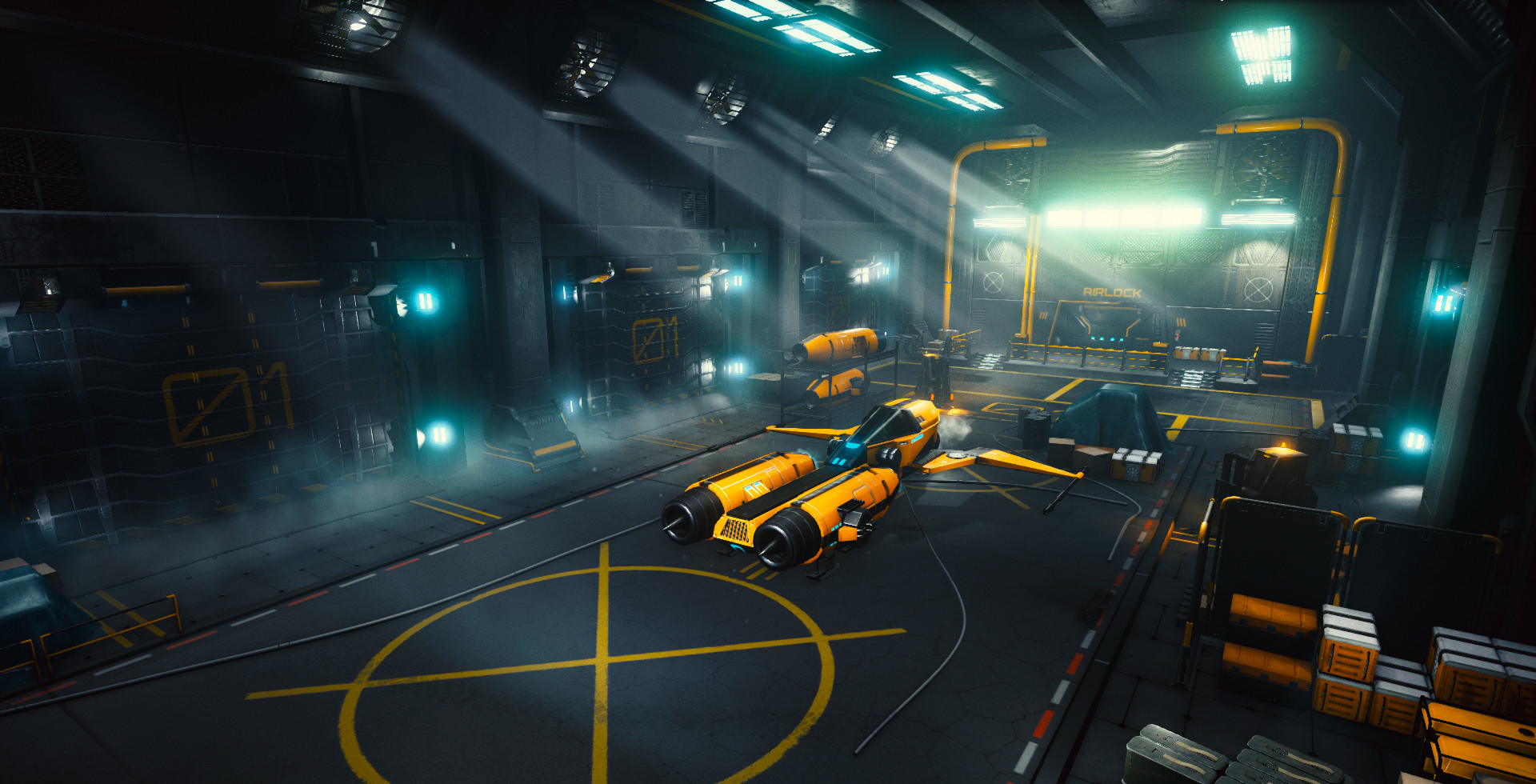 The Heroes 4 Hire awoke, ate breakfast and began their day of exploration by returning to the southern corridor and sneaking past the large chamber with the docks and the gas cloud spewing construct. When they reached the first door past the aforementioned dock-room, Illyia Baham pressed the glass panel beside the door, which slid open to reveal an identical circular room to the one discovered at the center of the complex. They stepped in, bear and all, and Illyia pushed the panel where it said, “Upper Deck”. The door slid shut quickly, they felt themselves rise though they could not see it, and then the door slid back open revealing an identically-constructed-but-differently-laid-out hallway. This one continued to the right, just like below, but it also turned ninety degrees and proceed straight out from this lifting room.

They proceeded straight out of the room and down the hallway presenting itself ahead. After 30 or so feet, they opened a door that revealed a huge chamber with three large vehicles that vaguely resembled birds. On one large flat wall of the chamber was a massive set of double doors, two normal sized doors in the north wall beside where they entered, and a set of stairs leading to another door and set of windows in the southwestern corner of the chamber the team recognized as another control room for this particular sub-complex. They first checked the nearest door in the north wall and found beyond a medium sized room with odd appointments… what looked to be benches and armoires. Inside the armoire like enclosures, they found what appeared to be strange suits of armor with helmets that were fully enclosed with glass around the faces. 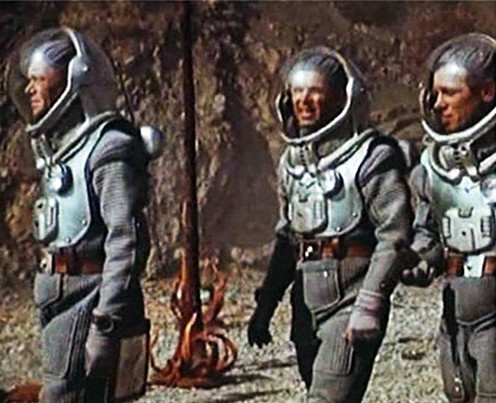 Lt. Diplo Norixius was the first to decide to try one on. The armor had an undergarment of odd construction, some sort of heavy cloth material of unknown type and origin, and with much struggling, frustration and assistance from his friends, Diplo manage to don it. The cuirass was surprising lightweight and strangely shaped, appearing to only cover the upper torso and leaving much of the midriff unprotected. It was adorned with odd greebling, ports and vents and symbols, one could only assume to be magical runes of some kind. The struggles continued, nothing working until Alton Beeblebrox suggested that they may have it on backwards, and then with a quick flip around the thing latched into place… mating perfectly with matching ports and connections on the undergarment. They then looked around, but did not find, anything resembling greaves, so it was decided that the armor must not include them.

The helmet proved just as alien and frustrating. A large, dome-shaped monstrosity seemingly more of glass than of the strange metal that everything else in this complex was constructed, they finally discovered that the helmet actually didn’t sit directly on the head, instead being attached to a matching ring-shaped device built into the cuirass. After much fiddling, they figured out how to slide a small lip on the neck of the helmet into the neck-ring on the cuirass, twist it about 15 degrees, and then with a click and a whoosh and a flicker, the dome-helmet latched into place. The glass in front of Diplo’s face immediately sprung to life with light, forming symbols of alien design in front of his eyes that he discovered, if he did not focus on them directly but instead looked through the glass at the outer world as he would normally, they were perfectly in focus and legible… although he did not understand them. Illyia tried to decipher them from the outside-looking-in, found that it was an exceptionally arduous task, and then scrambled to get into one of the two remaining suits. Once safely inside and with his Crystal Monocle on underneath the helmet, he read out the various displays:

Karraway donned the third suit, noting that while the suit fit Diplo fairly well, whomever these were built for must be quite tall, as the suits draped of Illyia and himself. With three of them suited up in the alien ‘armor’, the party then went to explore the larger room they came from, eventually heading toward the control room they saw in the southwest corner. Wary of their experience in the other large docking room on the lower level, the team set up something of an ambush at the bottom of the stair, and then Alarith Degries and Smedley “Deadly” Hampton eased their way inside the door to investigate. They found an identical room to the control room on the level below, and as expected a silvery-white egg-shaped construct floated out of the back alcove and approached them, making the same demands in the same alien language they had experienced before. The two retreated quickly and the construct followed, spewing the same white gas at them as during their previous encounter. The two reached the bottom of the short staircase post haste, and as the construct descended the team engaged it with everything they had. The fight was brief; the construct shocked several folks with its twin-pronged zapper, but was ultimately smashed to pieces by the seven Heroes and a pissed off grizzly. With a sigh of relief, the party realized that while these constructs were exceedingly dangerous and sturdy, they were not, in fact, invincible.

They searched the remaining rooms and found virtually nothing different than they had found in the previous control room and docking hangar, save the three large, bird-like vehicles parked in this one. A short discussion ensued, and it was quickly decided that these interesting suits of armor should be tested… perhaps in the excruciating heat of the magma chamber below. They retraced their steps back to the magma chamber, and gathered just outside the door. It was decided that Diplo would be the guinea pig, and with that he entered the chamber fully clad in the alien armor.

Some sort of meter in the helmet display immediately spiked up to the edge between a yellow and a red region, and an audible alarm beep start sounding itself at a slow, regular interval inside his ear; however, inside the suit the temperature remained at a comfortable level as he proceeded across the catwalk. The rest of the party observed him from the doorway, and when he made it to the central column of the construction in the middle of the chamber, he turned at mentioned over the Earring of Communication that he was perfectly fine. Illyia and Karraway proceeded to follow him out to the central ring of the walkway, and the rest of the party stayed in the hallway and wished they had cool new suits that protected them from the harsh environment of a caldera.

In the center of the chamber, the catwalk encircled a massive metal column of unknown construction, that extended down and into the lava pool several hundred feet below. The column also extended far above their heads, and as they traced it upward with their eyes they saw a second set of similar catwalks above them, roughly at a height that would make sense for the upper level of the complex. The column was massive, nearly fifteen feet in diameter, and there were glass windows inset throughout its exterior, giving vision to a rhythmic, pulsating blue light that seemed to travel from below to above, up the inside of the column. There were metal panels that were inset into the surface of the column at regular intervals around the perimeter and even with the catwalk, but it was unclear how or even if they opened in some fashion. They observed and noted what they could, but being unable to open anything here, they proceed down the southern exit from the catwalk and through the door. 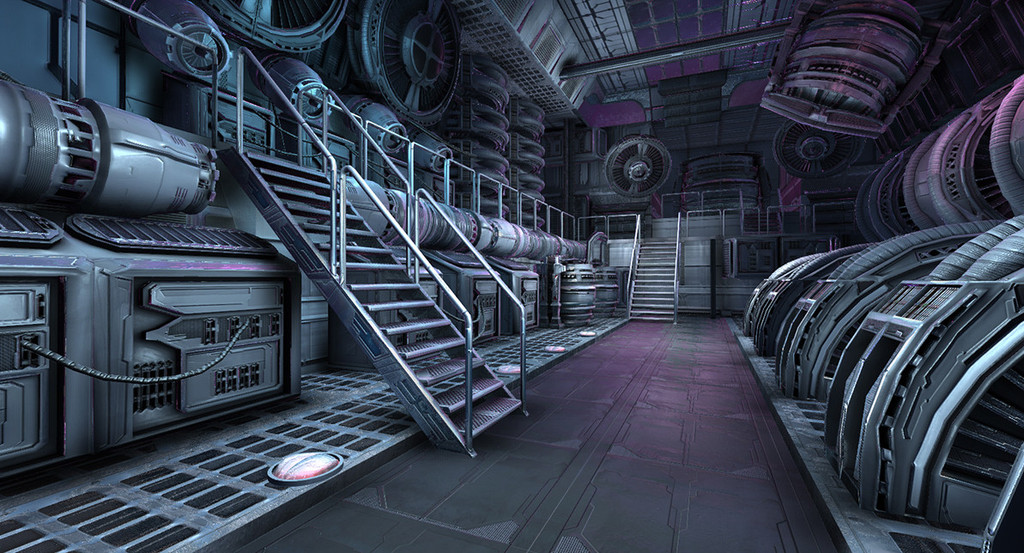 There they found the first door opened into a small antechamber with another door beyond, which they opened by use of the glass panel beside it and entered into a huge roomed filled with alien machinery. The machines were massive and filled the giant room, and there were conduits thrumming with the same blue energy as the column in the magma chamber criss-crossing all over the room… into and out of the machines at various places. Illyia stepped back and tapped the glass panel that controlled the door into this room again, and when it sprang to back to life he read the titling at the top of the panel with the monocle, seeing a word in the alien language he actually understood… although this context was extremely strange to him:

What is this strange place the Heroes have discovered on Taboo Island? What other mysteries will their exploration reveal? How is it connected to the mysterious disappearing act of the Dread Isle?