The Heroes 4 Hire arose and prepped their gear for their coming exploration of the mysterious ‘Taboo Island’, located in the middle of the caldera lake beside which sat the sleepy village of the Mantru tribe. When they were properly fed and prepared, the tribesmen Fanu had arranged paddle the party out in two of their largest outrigger canoes, Rumblebelly following along the shore for a mile or so before wading in and swimming across the narrowest point to join them on the island. The tribesmen were understandably nervous, and dropped them off at the stone docks to the northwest corner of the island. Once fully assembled, they team climbed the ancient, overgrown stone steps to the temple entrance.

The Heroes entered into the massive interior chamber of the ancient stone temple to find it had been used extensively as an encampment… a small village, actually… for a very long time by a number of people around fifty or so. Or at least at one time, for the village was long abandoned by the looks of things. Bedding and long-dead cooking fires were arranged around the chamber in small groups, and gendered bathhouses were discovered just off the main chamber. A short search revealed little in the way of clues as to what happened to the inhabitants, and even less of value. Another door opened to a long main corridor that continued deeper into the complex, and the team cautiously moved in to investigate.

Thirty feet or so down the corridor, the stone gave way to metal… floors, walls and ceiling… of a type they could not identify. The hall was flanked by rows of doors and lit by a low-intensity, bluish light from the ceiling, and as they reached the first door they searched for a way to open it. The portal had no handle or hinges, and was made of the same smooth metal at the walls, inset ever so slightly as to denote the presence of the portal. Beside the portal they discovered a small panel at about waist height that was seemingly made of glass and embedded flush in the wall surface. After a short period of frustration searching for a way to open the door, Illyia Baham used his Wand of Opening to Knock it open. The metal panel-door slid quickly and smoothly aside into an invisible recess in the wall.

Inside this first side chamber they found a metal room, sterile in its furnishings of a metal table the size of a bed with circular clamps in the middle of the edges and at one end, and a normal table against one wall with a compliment of strange, varied devices. As soon as they stepped into the room, the ceiling poured bright daylight into the chamber, pausing them a moment to wonder what caused it. Among the wondrous devices on the table they found a large glass cylinder capped on both ends by the same metal as the rest of the environment, and filled with a yellow, brackish liquid in which something was suspended motionlessly. Lt. Diplo Norixius investigated the cylinder at length before smashing it open to see what it was. The suspended article was a large, tadpole like creature nearly the size of a human palm, definitely dead, shelled in a purplish carapace and armed with two large pincers flanking a maw encircled with tiny tentacle-stubs. The team decided to put it back and stop touching the creepy thing, and used Mending to repair the glass cylinder. 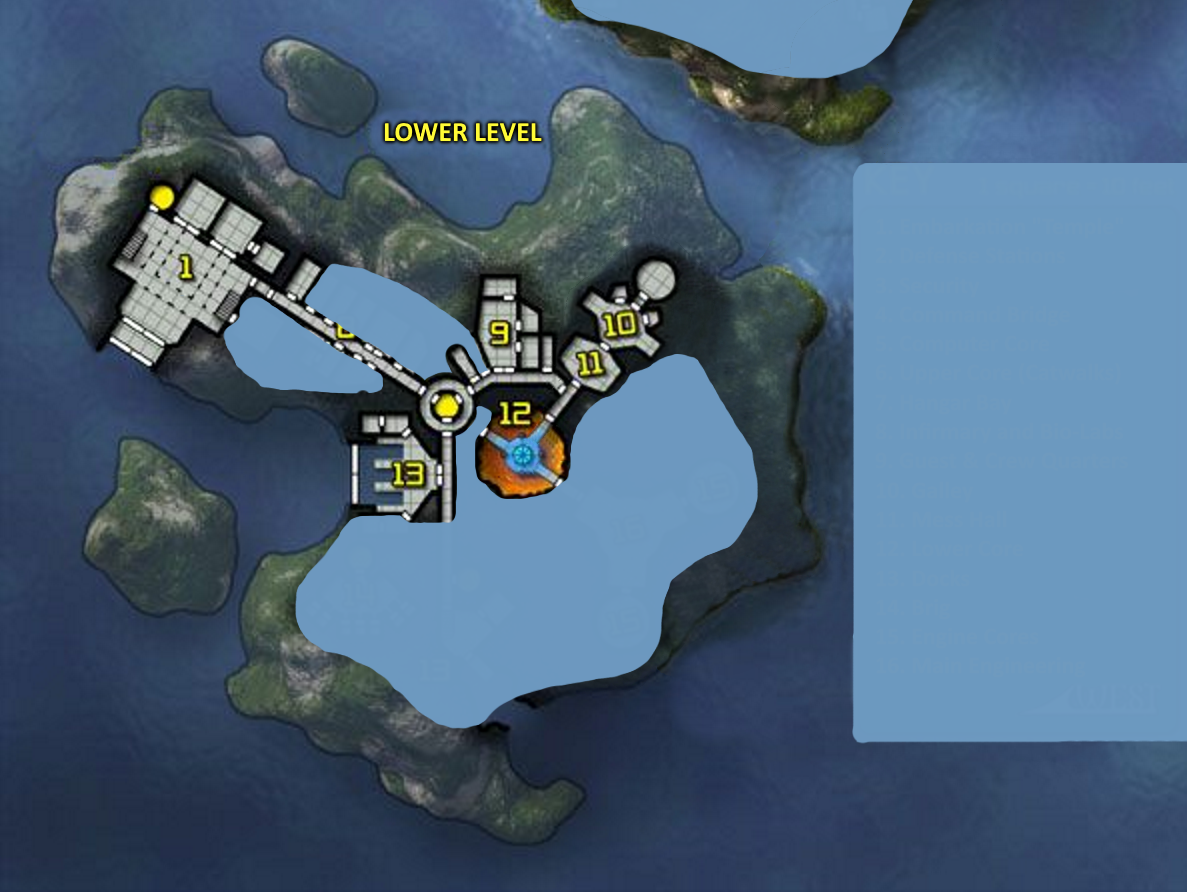 The party checked the next room next door in similar fashion, and finding the same or less, continued down the hallway to the door at the very end. Illyia Knocked the door open to reveal a central corridor encircling a vertical shaft accessed by three doors spaced around it periphery. His last Knock for the day gained them access into an interior chamber, glass panels set like at all the other doors beside each of the three accesses, and they beset to opening and investigating a panel in the ceiling. They pried a panel off the ceiling and found more strange boxes, crystalline plates and other oddities, connected by a multitude of colored strings interconnecting almost everything. Unlike what they found inside the Stone Chief, these crystalline plates hummed rhythmically with pulsating light.

They puzzled for awhile on these strange contraptions before giving up and continuing their search of the surrounding corridors. The team approached a door on the east side of the circular corridor, which slid aside quickly and effortlessly allowing them to proceed into another wing of the ‘Temple’. Unlike the first long corridor, the strange, glass panels inset in the walls aside the doors had symbols glowing within them. Illyia used his Crystal Monocle to interpret them, which proved to be mundane concepts associated with doors… “Locked”, “Unlocked”, “Press to Open” and the like. They searched down the wing, discovering sleeping quarters, common areas, a kitchen, freezer and storerooms dedicated to the garrisoning of a small-sized group of unknown humanoids.

Down one long hall in the quarters wing, the party approached the end door noticing as they went the temperature of the air was steadily climbing. When they opened the door, they were surprised to find a natural chamber of stone and not more of the metal walls, floors and ceilings producing magical light from nowhere… the vertical pipe and volcanic vent over a magma pocket several hundred feet below. Extending out into the near-unbearable heat of the chamber was a metal catwalk leading to a scaffold surrounding a massive, alien machine, glowing bright blue from many places on its surface and thrumming-and-humming audibly over the constant rumble of the magma. The Heroes stood amazed for few moments, and then decided to find elsewhere to explore.

They retraced their steps to the circular central hallway, and chose the southwestern door and hallway beyond to explore next. Sixty or seventy feet down this metal hallway they came to a large double-doors in the right hand wall, which slid open cleanly as they approached. It opened into a massive room that descended several steps down to a set of interior docks, and the western portion of the room was submerged before ending in a pair of massive pair of exterior doors, again made of the same metals and materials as the rest of the complex. Steps in the north and south walls led to small personnel-sized doors beside rows of windows overlooking the chamber. Half the party entered through the northern door to search the small room while the other half kept watch in the main chamber. As they searched, out of a storage niche in the back floated an egg-shaped construct nearly the size of a man, made of similar materials and construction as the rest of the complex they had encountered thus far. 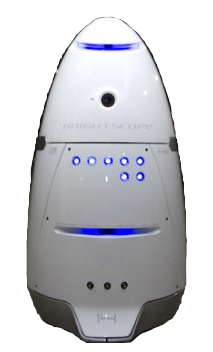 The construct made a noise that sounded like language, although it was incomprehensible. Illyia cast Comprehend Languages as the construct repeated itself, “This is a Restricted Area. State your designation and purpose.” They stammered out a response, but when they saw narrow panels open on either side and metallic rods extend out, they decided it was time to leave. They retreated quickly outside the door of the small room and down the stairs, where they took up a fighting position as the construct pursued. They bashed the construct with hammers and swords and arrows and fist, but the construct sprayed out a foggy cloud of gas, and Alton Beeblebrox and Lt. Diplo Norixius immediately fell unconscious. The construct then pointed its two rod-arms, the right a single solid bar and the left tipped in two metal prongs about three inches apart, at the team and a bolt of lightning streaked out from the pronged rod shocking the party as they tried to retreat further. Karraway picked up Beeblebrox and Smedley “Deadly” Hampton had Rumblebelly drag Diplo back out into the corridor as the construct followed. The construct pressed the attacks with the lightning rod, until the party retreated even farther down the corridor in the direction in which they came, where it finally stopped at the large double-doors and appeared to be unwilling to continue past.

The Heroes decided all that was enough for one day, and carried Diplo and Beeblebrox back to the large, stone temple chamber in which they had originally entered. They awoke a little under an hour later, but the whole team set up camp in that large chamber and secured the door leading to the metallic hallways of the complex. They ate, rested and slept the night, preparing for the next day’s exploration.

What other perils await the Heroes 4 Hire on Taboo Island? What other mysteries will their exploration reveal? What is this strange Temple?

Everything ok DMMike? Been away a month and the adventure is at the same point. I’m hungry for more!

My apologies for the delay. Crazy summer schedule for the players has curtailed our gaming sessions greatly, as we have only played once in the last 2 months.

I do have one more written installment nearly finished, and should have it posted in the next few days.

Out of curiosity, have you actually read all our Adventure Logs from the very beginning of the campaign? If so, I’m impressed… I kinda thought no one was paying attention.

The Dread Isle: Mysteries Unknown I think it's a suit of armor...