The Dread Isle: Village of the Mantru

The Stone Chief, and the Talking Chief

The Heroes 4 Hire arose early the next morning, gathered their things, said farewell to their new feline friends and departed to continue their survey of the greater interior of the Isle of Dread. They continued their circling path of survey until they reached the southwestern coastline, relatively near to the village of Tanaroa and its impending wall. There Illyia Baham used Sending to message the Sea Wyvern to come pick them up, and they party sailed out to one of the barrier islands to explore it before continuing farther north into the interior mountain ranges.

The party explored a small, rocky atoll a few miles off the main island, where they discovered the nesting area of a group of griffons, where a short fight ensued as the beasts took offense at the Heroes trespassing. The party quickly drove them off as the griffons retreated to stay alive, and the team quickly searched the nests and found little of value. From there they continued along the spine of the atoll until coming to the northern tip, where the Sea Wyvern picked them up and took them to a more northern landing on the western shores of the main island.

They landed on a small peninsular spit of land extending out into the surf from the range of mountains forming the western rampart, where a large river form an estuarial delta. From there, they traveled upriver, mapping as they went, surrounded on all sides by the imposing vertices of the mountains of the interior. The river eventually forked in a triple-branch, and there they followed the southeastern most branch farther up into the interior along the southern mountain range. When they reached the river head several score of miles into the interior, they climbed up the southern mountain and doubled back, observing their previous path from atop the range.

Halfway back along the southern ridges, the Heroes discovered the mountain path they were told about by both the Neanderthals and the Rakastas, the very footpath that led to the rope bridge, the Central Plateau and eventually to the village of the Mantru. Excitedly, the Heroes turned and followed it.

They reached the fabled rope bridge in short order. After a few shaky tests, the Heroes decided the bridge to be in good and sturdy repair, and began to cross. As they reached the halfway point, well over 100’ down to the riverbed in the gorge below, the party spied a flock of flying creatures approaching, a flock that quickly revealed themselves to be nine Pteranodons moving to attack them. Lt. Diplo Norixius and Smedley “Deadly” Hampton quickly took to the air upon his Giant Eagle steed, engaging the flying dinosaurs in close-in aerial combat, while the rest of the party ranged the creatures from the bridge. The team quickly dealt enough killing blows and wounds that the few surviving Pteranodons retreated, but in the midst of the fight Diplo attempted to toss the Immovable 10’ Pole to Adept Karraway, who promptly fumbled the catch and the pole fell from the bridge into the gorge below. 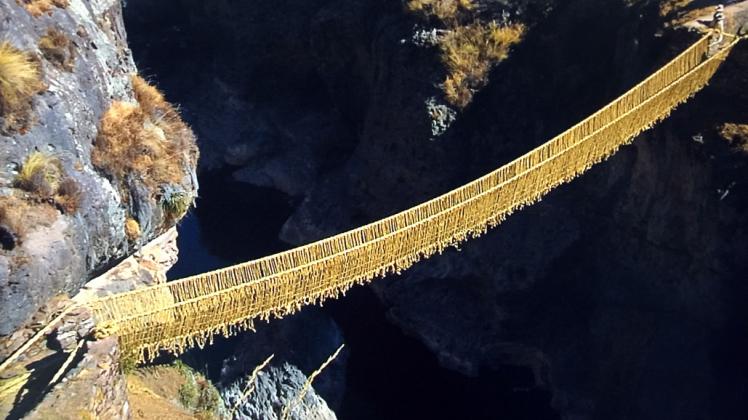 Diplo immediately dove the Giant Eagle steeply into river gorge in pursuit of the plummeting Immovable 10’ Pole. The speed of the Steed held true, and Smedley was able to snag the magic item from the air; however, when Diplo hauled back on the reigns and the Eagle tried to pull out of the ensuing dive, the trio quickly ran out of altitude and slammed belly-first into floor of the gorge. The crashing damage immediately dispelled the Steed, sending Diplo and Smedley rolling and sprawling across the rocks and underbrush. Banged up and bruised, the two lay there for a moment making sure nothing worse was broken, and then Smedley raised his arm in victory, still gripping the Immovable 10’ Pole in pristine order. The two then got up and dusted themselves off.

Illyia made a few trips via Dimension Door and returned Diplo and Smedley to the bridge, and with more caution the party finished crossing the gorge to the fabled Central Plateau of the Dread Isle. The plateau was a high steppe covered mostly in grasslands interspersed with temperate evergreen forests rooted in rich volcanic soil. Central in the nearly 30-mile diameter plateau stood a towering mountain peak oddly chopped off flat many thousands of feet above the plateau itself. The Heroes set off exploring and surveying the plateau in a clockwise manner, first tracing the edge of the plateau from the bridge westward several miles before they came to the waterfall that fed the center branch of the three-way fork they found below. They turned inland to follow the river upstream nine miles, where they came across a fork where they turned to follow the right-hand fork around a small forest and continue eastward. The river swung around the central spire counterclockwise east and then bending around northward, before they came to the head of the river collecting itself from the eastern side of the central spire-mountain. 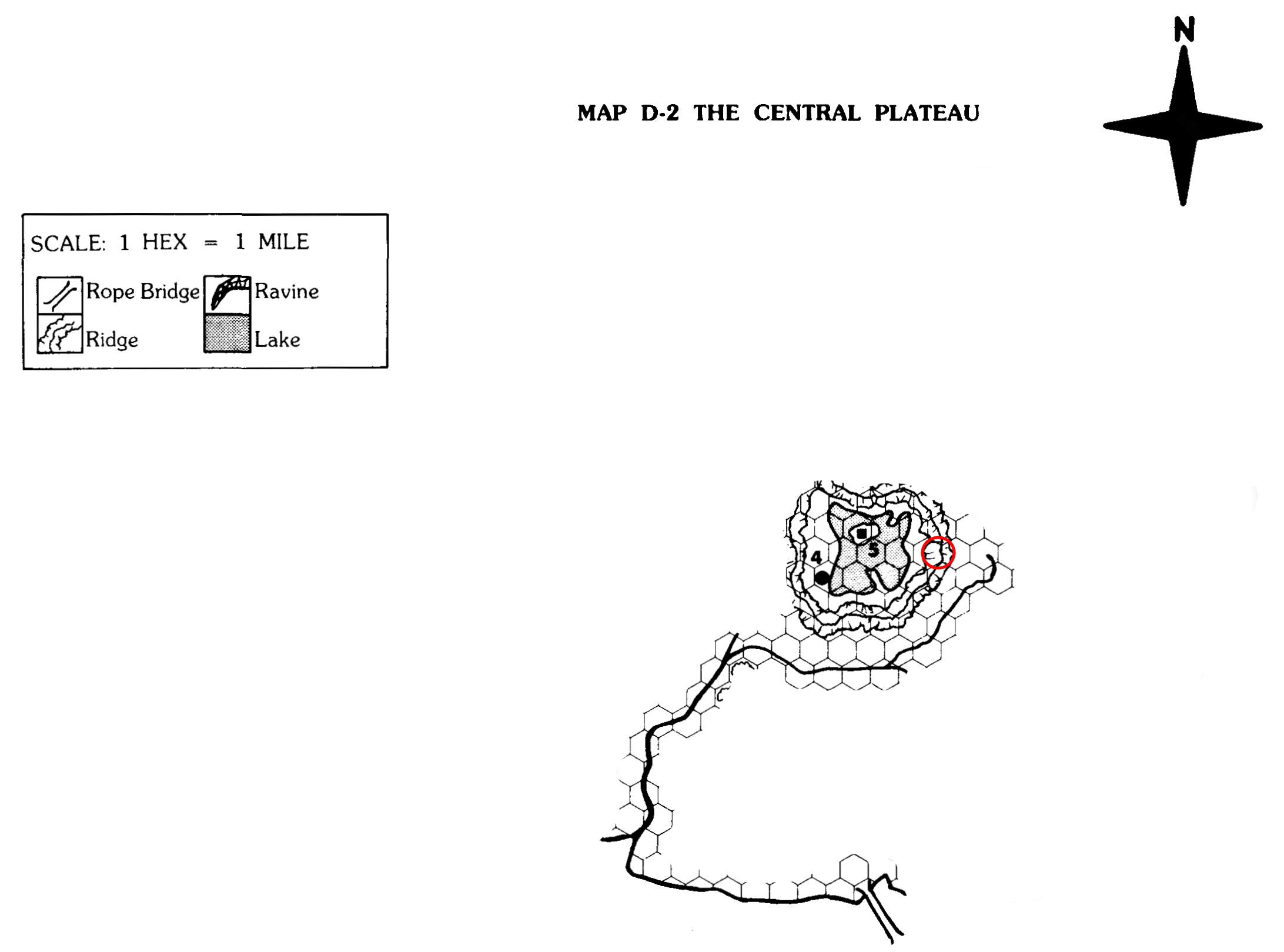 The Heroes camped the night at the base of the central mountain, and in the morning they scaled the near-vertical mountain wall for half the day before reaching the upper rim. Nearly 14,000’ of altitude, the freezing temperatures and thin air revealed an interior caldera 5,000’ below filled partly with a lake and a small cinder-cone island in the middle mostly covered with a jungle canopy. They also spied on the far western edge of the lake was a small primitive village, supposedly the fabled village of the Mantru.

The party descended the interior face of the mountain wall, which was considerably easier and faster than ascending the exterior. They circled the southern edge of the interior lake and approached the village from the south. A timber stockade encircled the village, and a small band of warriors exited out the stockade gate to come meet the party. They were cautious at first, warning the party to halt their advance on the village until they had ascertained their purpose, and after a short conversation they sent a runner to fetch the ‘Talking Chief’ who came to meet them. After another short and polite conversation, Fano the Talking Chief invited them into the village to meet the Mantru people. The Mantru held a feast in honor of their arrival, and the Heroes enjoyed the evening learning the customs of a new people. They shared their mission with the villagers, as well as some of their adventures during their survey of the interior, and discovered that while they very much appeared to be a relative of the Tanaroans, they had no knowledge of their southern cousins nor anything south of the Tar Pits. At the end of the evening, the Mantru opened their huts to the Heroes to sleep for the night.

Fano took them out to one of the largest huts that stood on piles sticking out of the water a few yards offshore. Inside, they found a slightly larger than man-sized stone totem, a stylized representation of an elderly villager. The Stone Chief appeared to be a single solid slab of carved granite, save a single hole recessing the interior of his partially opened mouth. They investigated the totem, curiously finding no tool marks in the worked stone, and raising some baffling questions on how the stone was carved. In the back of the totem’s “head”, Illyia discovered a panel made of an unidentifiable metal, but he could not figure how or if it could be removed. He last tried his Wand of Opening, and the panel opped off into his hand.

What he found inside the rectangular space behind the panel was even more baffling. Inside he found several rectangular objects, some nearly paper thin, some the thickness of several coins, mounted, covered in strange indecipherable markings and connected with strangely colored strings. Several of the rectangular plates were transparent, as if made of some sort of crystal. He cast Identify on the contraptions, but nothing availed. He used his Crystal Monocle and read the strange inscriptions, but while he understood the words, he did not comprehend the meaning.

The Heroes convinced Fano that they to truly see if they could help the Stone Chief, they would need to visit “Taboo Island”. He told them that the last time the Stone Chief spoke was many months ago, to command that five villagers be sent to Taboo Island, and then went silent. The villagers were chosen and sent, three men and two women… and it was well known that no one ever returned from Taboo Island. The villagers believed those sent lived their lives out in service of the Stone Chief’s family. Fano arranged for two outriggers to take them out to Taboo Island in the morning and drop them off, and with that the team returned with Fano to the shore and the village for the evening.

What is this strange device embedded in the Stone Chief’s head, and what is it’s purpose? What fate awaits those that visit the Taboo Island? What will the Heroes find there?

The Dread Isle: Mysteries Unknown I think it's a suit of armor...