Personality Trait
~ I spent so long in temple, I am socially awkward in the outside world.

Ideal
~ I always help those in need, no matter the personal cost.

Bond
~ I owe my life to a priest who adopted me after my mother’s death.

Flaw
~ I am suspicious of strangers and expect the worst of them.

Background: Acolyte
Mother was a dancer, looked down upon by her Mulan people. She didn’t know her history very well. She met a paladin, an elf who had taken the Oath of the Ancients and admired all that was beautiful. Mother was a hopeless romantic and they fell in love. Duty called and Father disappeared, leaving a heartbroken Mother. After Calyx was born, Mother was once again happy, although melancholy would occasionally settle in.

On Calyx’s fifth birthday, her mother’s home was stormed by disapproving outlanders and criminals looking to kill Calyx simply for rumors regarding her being a half-elf. Calyx escaped and watched her home burn down in flames. Lost in the forest, weak and malnourished, a Chondathan priest by the name of Father Grim Poe Salamin, a tall, middle-aged man with emerald eyes and dark hair, rescued her. Unbiased and with a heart full of charity, he took in the small half-elf and raised her as his own.

Shortly after Calyx turned 16, a venerable paladin started spending what would prove to be his last days in the temple. Wary and distrusting of the stranger at first, Calyx eventually begins studying under him and learning the ways of the paladin. When he died, her mentor left Calyx all of his worldly possessions, including his journals, scrolls and other scripts. Calyx spent the next three years of her life studying the ways of the paladin before deciding to quest for the Oath of Vengeance, and she began her own adventures a year before reaching adulthood. 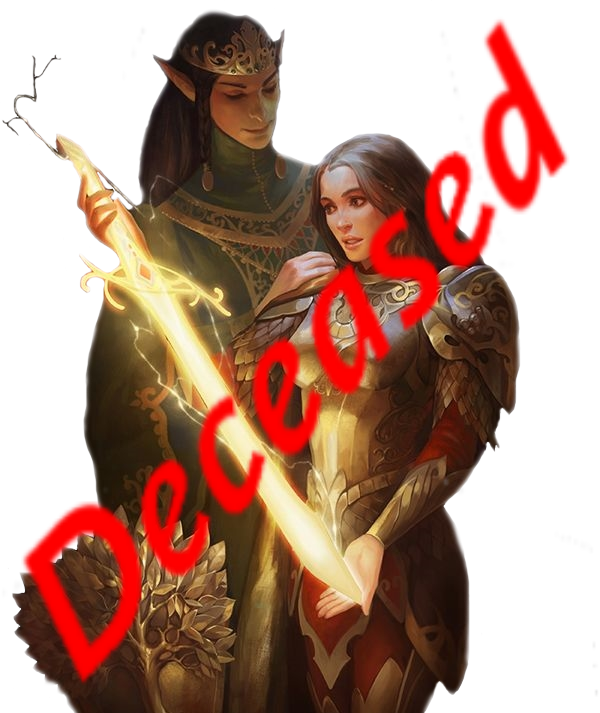