Magic Resistance. The spider king has advantage on saving throws against spells and other magical effects.

Spider Climb.  The spider king can climb difficult surfaces, including upside down on ceilings, without needing to make an ability check.

Web Shot (Recharge 5-6) (45’/90’). +9 to hit, one creature. Hit: The target is restrained by webbing. As an action, the restrained target can make a DC 18 Strength check, bursting the webbing on a success. The webbing can also be attacked and destroyed (AC 10; hp 15; vulnerability to fire damage; immunity to bludgeoning, poison, and psychic damage).

Krekklefeets, The Spider King was once the size of a human hand, an ordinary spider and the pet of Slaggoth the Necromancer a millennia ago. When Slaggoth passed away, her pet spider was released in her tomb when she was interred with all her possessions, her apprentice and her three consorts.

The spider did not wither with age and die, however. The residual magic of Slaggoth’s works… her lab tools, her journals and spellbooks, perhaps even her corpse itself… suffused her tomb and extended the spider’s life indefinitely. The spider grew, both in size and in intellect, until it became self-aware. The spider no longer felt the constant, instinctual hunger to feed, and eventually realized it no longer needed sustenance to survive.

Remembering its time as Slaggoth’s pet, it threw itself into her tomes and books, knowing they were of some monumental importance to its situation and its existence. Eventually, over centuries, the spider learned to read, and through surreptitious observation and mimicry of the residents who lived in the surrounds around the cave complex that housed Slaggoth’s hidden tomb, it learned to speak. The spider read every word of every book entombed with its former mistress, and along with some intuitive deduction concluded its own answers to the existential questions it originally sought.

Understanding the nature of its mistress’s work and the potential danger it presented, the spider took it upon itself to guard her tomb. Over the ages, grave robbers and knowledge seekers occasionally uncovered the tomb’s location, and took many different actions when presented with the giant spider guarding the way. One such encountered ended with the silvered head of a greataxe embedded in the spider’s hard carapace, just behind it’s cluster of eyes. The handle was snapped off and the attackers were defeated, but the silver axe head remained and the wound eventually healed, leaving the spider with the appearance of its own silvery crown.

Over the centuries the spider continued to grow, eventually reaching gargantuan size. Its intellect also grew, and at over 1300 years old the spider held the wisdom of the ages. For those few that uncovered the location of the tomb, the spider did not immediately attack them, but first talked with them in an effort to ascertain their intentions. Those that were aggressive were destroyed. Those that were curious would be allowed to, respectfully, enter and explore the tomb. The spider would stipulate that a single memento may be taken from the tomb complex, but all tomes were to remain in the tomb. Any who tried to remove any books would be destroyed as they left.

Recently, a young girl from the nearby village of Rybalka, wandered into the cave complex and came upon the great chamber that served as the spider’s lair. When presented with the terrifying visage of a gargantuan spider, the girl did not flee and showed no fear. The spider inquired as to her name, and the child answered, “Jira”. She was shy and meek and filthy, reeking of mud puddles and creeks and frog-catching, but she stayed a great while chatting with the ancient spider. She asked the spider its name, and when it told her it did not have one, she named him Krekklefeets for the sound his feet made as he climbed the walls of the cavern around her, and entitled him The Spider King for his silvery axe-head crown.

And so began the friendship between Jira, the seven year old girl from Rybalka, and Krekklefeets, The Spider King. Over the next few months, Jira would visit Krekklefeets almost weekly, and the ancient took quite a fancy to his young friend. Nearly four months after their first meeting, Heroes 4 Hire encountered Krekklefeets as they sought the hidden tomb of Slaggoth, and managed to finesse their way into a new friendship. 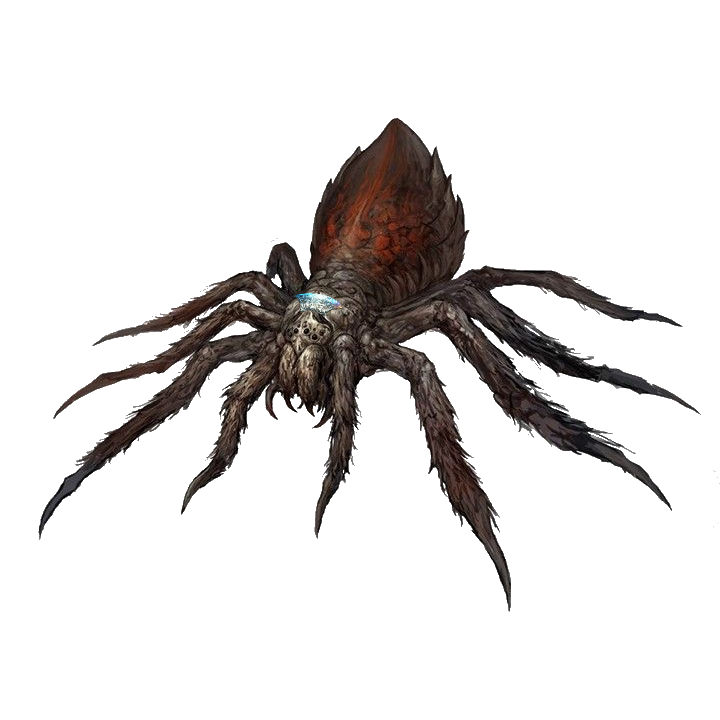