Personality Trait
~ I can stare down a hell hound without flinching.

Ideal
~ NATION. My city, nation, or people are all that matter.

Bond
~ Those who fight beside me are worth dying for.

Flaw
~ My hatred for my enemies is blind and unreasoning.

Background: Soldier
To any dragonborn, the clan is more important than one’s self. Dragonborn devote their respect to the clan above all else, even the gods. Green Medrash was the leader of the Clan Norixius when the attack occurred. At that point, I wasn’t old enough to know what happened… or, who happened. What seemed like a random attack, the kind Green Medrash and Scarlet Korinn had defended me from countless times before, was different that time.

When I woke up, Green Medrash and Scarlett Korinn were dead, each with a longsword through their windpipes from behind. I died that day, when the Norixius clan did… not physically, but without the clan… without my brothers, my sister, my mother Scarlet or my father Green… I had no reason to move, to eat, to live. It was then that the Eridani took my lifeless shell in.

Being conscripted by the Eridani military gave me a sense of belonging again, and I quickly grew to be the roughest, toughest rock-biting dragonborn soldier they had ever seen. I was thankful for my new friends, my new family and especially my adoptive mother, a half-orc trainer named Neega. These were the friends and family I remember growing up with, and I excelled through the ranks until I earned the commission of a Lieutenant.

I decided to leave Eridae after meeting the legendary Paladin, Anton Calabra. The human took me under his wing, trained me to be stronger and faster… mentored me to be better than I was. My only regret was leaving my brothers-in-arms and the adopted nation I had grown to love. The life of the Paladin gave me a sense of purpose again, but has kept me blinded to the fact that I still do not know who killed Clan Norixius. Until now… 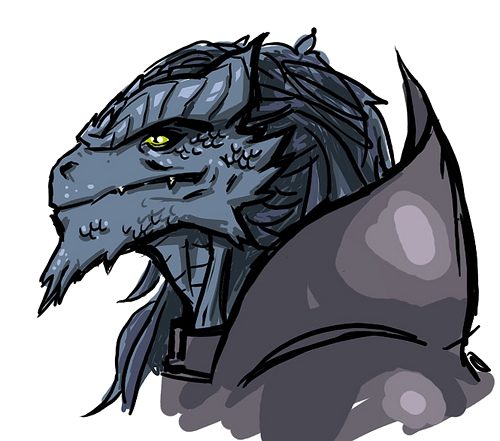