Personality Trait
~ I place no stock in wealth or well-mannered folk. Money and manners won’t save you from a hungry owlbear.
~ I was, in fact, raised by wolves.

Ideal
~ CHANGE. Life is like the seasons, in constant change, and we must change with it. (Chaotic)

Bond
~ I suffer awful visions of a coming disaster and will do anything to prevent it.

Flaw
~ I remember every insult I’ve received and nurse a silent resentment toward anyone who’s ever wronged me.

Background: Outlander – Hunter-Gatherer
My first memories are of music. My lute filling the halls of Orias’ Castle with the same melodious tune. Orias loved to come sit and listen, and in exchange for my music he took care of me, protected me from the other fiends that roamed his realm and often came to visit.

The visiting fiends often whispered about Orias when he wasn’t around, say how they missed the days when their lord, Oriax the Mad, was someone to be feared. Now Orias the Changing stayed locked in his castle whittling away, listening to his song bird and play with his other mortal toys. They hated his masquerade. They thought it made him weak.

Looking back what they did should have been no surprise. They stole me, took me away from Orias and the castle I had called home in his realm of the Nine Hells for more than fifty years. They took me to the mortal world and left me to die. “Let the wolves chew her bones,” they laughed. But I didn’t die. And the wolves didn’t chew my bones.

A pack of dire wolves licked my wounds and took me in… taught me to survive, to hunt, to kill. There was a run in with a group of hunters once that stumbled upon more than they were looking to find. Fortunately, none of the pack was hurt. The hunters didn’t fare so well. They did, however, have on them a number of weapons which I picked up and began practicing with. It was almost second nature, as if it was muscle memory from a long, long time ago.

During my time with the wolves I also bonded with a black pup I named Potema. We were inseparable always, including the day of the attack. Potema and I had been out hunting when we sensed something was wrong. We immediately ran back to the pack but it was too late. Something had killed all the wolves, old and young alike. They were thrashed about, torn, crushed, gnawed. We had never seen anything like it.

Now nearing my hundredth birthday, Potema and I are still on the hunt for whatever this monstrosity is. We’ve tracked signs of it to a wooded area in the central region of Eridae. We are headed to the nearby village of Hellespont where I hope to get information before we set off to end this. We’re so close I can taste it. This time will be different.

This time there will be no escape 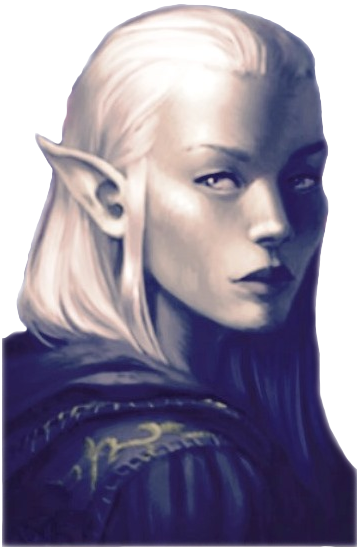