These vessels are ancient relics that have been used in vile rituals for centuries and have absorbed the evil of their users. A character who touches one of these vessels must make a DC 13 Charisma saving throw. On a save, the character senses the relic’s unholy nature and can put the item down. On a failed saving throw, the character falls under a demonic curse and refuses to part with the vessel or to allow others to handle it. After six days, the character becomes a servant of the cult and returns to this chapel. If still in possession of the relic, he or she replaces it on the altar and then stays on as a guard.

Four ancient bronze vessels — a shallow bowl, a pair of goblets, and a vase like pitcher. All glow an ugly purple.

These relics were consecrated and then destroyed by Father Tristan following the Caves of Chaos mission. 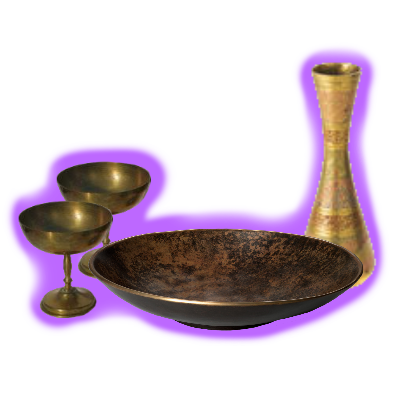